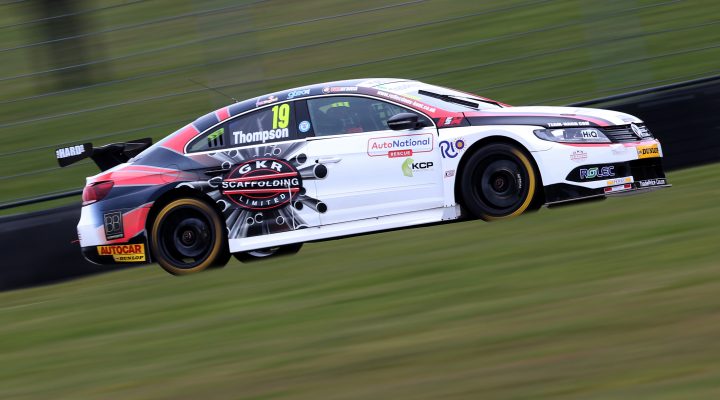 Dunlop MSA British Touring Car Championship rookie Bobby Thompson admits that the first half of his debut season hasn’t been as successful as he would have liked but he’s looking to kick on from Snetterton – a celebratory weekend he’s proud to be a part of.

“It is such an honour to be a part of this meeting, celebrating 60 years of the BTCC with the ‘Diamond Double’,” said Thompson. “They are going to be talking about it for years to come and I hope I will still be in the championship to listen to all those stories in another ten or so years’ time.

“It’ll be one of those historic weekends that’ll live long in the memory along with the likes of Silverstone 1996, when the championship supported the British Grand Prix, or the meeting at Donington Park in 1999 where Matt Neal won £250,000 as the first Independent driver to win a race outright.

“I wasn’t born when they supported the Formula 1 and I was too young to remember Matt’s win but all I know is that this is going to be the biggest race meeting of my life.”

The reigning VW Cup Series champion has yet to open his championship account but a positive test at Snetterton during the mid-season break, coupled with his charging drive in the final race at Croft, has left him in a buoyant mood.

“I can’t deny that my first half-season in the BTCC has been anything but a steep learning curve and after winning the VW Cup Series title last year it is tough knowing that you are going out there every time not fighting for a win but just fighting for a point or even a place in the top 20,” says Thompson.

“The third race at Croft was the first race all year where I could just catch, pass and pull away from anyone around me. I don’t think I have ever driven harder in my life but it felt great and it was good to give my team a real reason to pack up with smiles on their faces.

“I really feel that we turned the corner last time out. I just changed my approach to driving on worn tyres and it worked.

“I know Snetterton really well and while the ‘Diamond Double’ is a step into the unknown for most of us I genuinely think that I will be a real contender at the business end of the day.”