Chilton pulls cat out of the bag after engine troubles 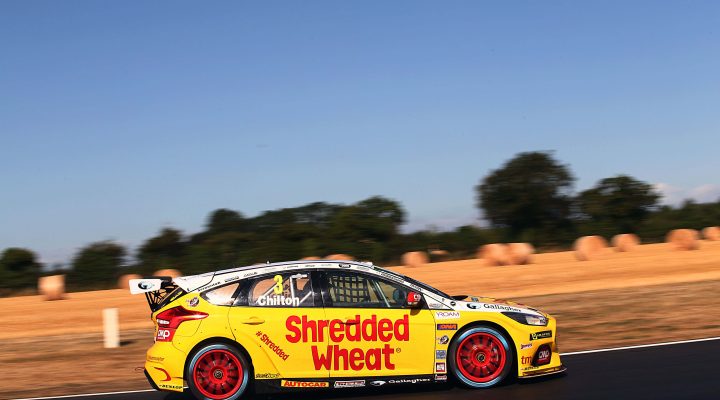 Team Shredded Wheat Racing with Gallagher’s Tom Chilton didn’t have the best of luck on a frenetic day’s qualifying yesterday at Snetterton, with engine trouble hampering his progress ahead of the all-important Qualifying 2 session for the ‘Diamond Double’.

A new unit was fitted to his Ford Focus RS ahead of the weekend but an errant cam-belt led to water circulation issues, overheating and, ultimately, an engine change. Team Principal David Bartrum said post-Free Practice 2 that the outfit would, at best, be 15 minutes shy of the time needed to complete the change in time for Qualifying 1.

As it was, Bartrum was almost exactly right – the team pulled out all the stops to ensure Chilton was able to compete in the final ten minutes of that session, enough time for him to post a time.

“I’m delighted with how yesterday ended up,” said Chilton. “I did one flying lap in Free Practice 1, in the wet on wet tyres. Everyone went out on slicks and I decided not to go out and do any flying laps as I wanted to do our housekeeping – scrubbing the tyres.

“We scrubbed another set at the beginning of Free Practice 2 before a belt flew off which meant there was no water being pumped around the engine and we overheated.

“I didn’t do any laps from there and the guys were forced into putting a new engine in the car, which took until the last ten minutes of Qualifying 1.

After the drama, Chilton did manage to pull it out of the bag.

“We hadn’t done even one flying lap on slick tyres and the circuit was actually very different from testing – over a second-a-lap faster, so we actually did have changes to make on setup.

“I was 16th in Q1 and I was upset with that. It was just bad luck if I’m honest. I just thought then, ‘let’s get our heads together’. We took the success ballast out for Q2. We tweaked it all and nailed if for third!

“It was marvellous really. It was actually just my sixth flying lap of the whole day. With the problems with the engine earlier on, and given it was my first proper, proper go at it, I’ve got to be pleased.

“The team worked absolutely flat out and we got out there – now we’re up there in the running for the big one. I was biting hard on the steering wheel. I’m normally relaxed but I gave it some. I didn’t want to let anyone down.