Goff and Eurotech bounce back at Snetterton 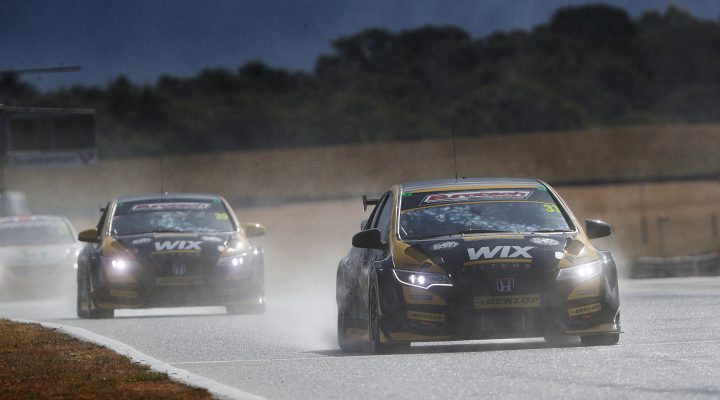 WIX Racing with Eurotech bounced back from a disappointing Croft weekend with a race win and pace aplenty at Snetterton as the Dunlop MSA British Touring Car Championship marked its Diamond Jubilee.

Jack Goff laid down markers in practice before sealing a double pole position – and a new qualifying lap record in the process, ensuring he’d be on pole for the much vaunted ‘Diamond Double’.

On Sunday, he followed up with a remarkably close victory, and second spot in the special, one-off 60-mile finale – with a bumper double-points haul in his pocket.

The team’s promise was evident from the off in FP1, with the Eurotech-run Simpson Racing Honda Civic Type R of Matt Simpson topping the times on a tricky drying-but-still-damp track.

In FP2, all three Eurotech Civic Type R’s were in-amongst it at the top of the times. When the chequered flag fell, it was Goff who headed the way with Simpson third and Brett Smith fifth. A trio of WIX Racing with Eurotech machines in the top six – no mean feat.

Conditions improved for qualifying and the strength of the Eurotech Civic Type R’s was clear, with Goff taking pole and sealing a new lap record. Simpson took third and Smith forth. With Dan Cammish sitting in-between in second, it made for an all-Honda front two rows on the race one grid.

A second qualifying session for the ‘Diamond Double’, 60-mile, double-points encounter followed. Once again, Goff put the Type R on pole position, smashing his own lap record. Both Smith and Simpson fell foul of track limits however, placing ninth and 13th respectively after having their fastest lap times disallowed.

With Sunday came more rain, and unpredictable track conditions. Goff fired away from pole position in the opener and drove with intent from the off, building up a commanding three-second lead in the wet.

His advantage looked strong but the Subaru of reigning champion Ash Sutton closed in, in the latter stages, resulting in one of the tightest BTCC race finishes in recent memory.

A series of fastest laps midway through the race eventually left Sutton on Goff’s tail with less than two tours of the Norfolk track to go. Slight contact through Brundle’s was followed by a tooth-and-nail scrap over the last four or five miles of action.

A slight moment at the Bomb Hole for Goff let Sutton around the outside on the last lap and both cars exited the final corner almost side-by-side. Goff had a better run to the line, though, and hauled his Honda alongside, and ultimately just ahead, of Sutton’s Subaru as the chequered flag fell – clinching an extroardinary photo finish by just 0.152s.

The team suffered a big blow ahead of Race 2, missing out on the pit-lane closure time while trying to make set-up changes. This meant Goff would have to start from the pit-lane rather than the front of the grid.

Come lights out, Smith was in the thick of the action. After a race-long battle with Tom Chilton, he eventually took the chequered flag in 12th. Goff and Simpson, meanwhile, battled their way up through the back of the pack to finish 17th and 19th respectively.

Goff sat on pole for the ‘Diamond Double’ and made a clean getaway, taking the lead from BTCC legend Matt Neal with Tom Ingram getting the better of Tom Chilton to snatch third.

It remained that way until the rain returned. As leader, Goff was the barometer and a lock-up into turn one, despite warnings from his engineer over the radio moments earlier, meant Neal was able to nip ahead and take advantage.

The top three took the chequered flag together, with Neal leading Goff and Ingram home, lifting Jack Goff to fourth in the Driver’s Championship, just one point behind Matt Neal in third and seventeen behind leader Tom Ingram. Eurotech closed to within three points of Speedworks Motorsport in the Independent Teams’ standings.

“That was a pretty special weekend,” said Goff. “To not only be a part of the 60th anniversary weekend but to put it on pole position in both qualifying sessions with a new lap record will be something that will live long in my memory.

“To then convert Pole into a race win in the ‘Diamond Double’ race along with two Independent wins was just a great way to bounce back after our disappointment of Croft”.

Team Principal Jeff Smith added: ‘I am incredibly proud of the whole team. We came here after a shocking round at Croft which has turned in to our bogey circuit, but we kept our heads up and kept pushing.

“We knew our cars are strong at Snetterton and we worked on improving our strengths at the two-day test here which has obviously paid dividends. The lads have driven brilliantly, and this has been the result of a fantastic team effort. It is even more special being the 60th anniversary weekend.

“I am proud that we will go down in the history books as a part of that success and that we are back on track to seriously push for the championship.”