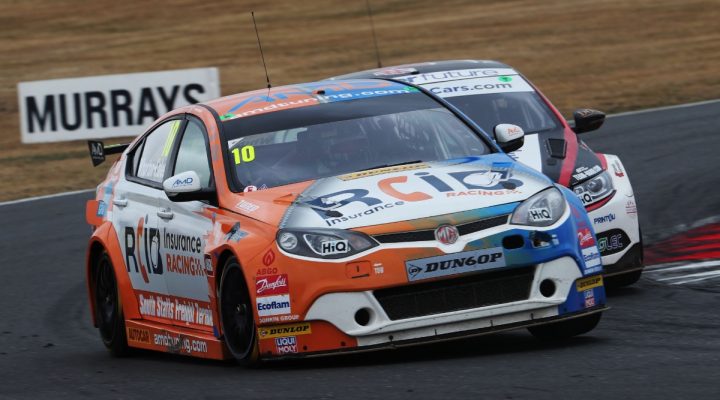 Last weekend’s celebratory ‘Diamond Double’ weekend saw 23 of the 31 car field opt for the Dunlop Sport Maxx Option-Soft tyre in race one, with all drivers required to use the yellow side-walled Prime tyre for the 60-mile, ballast-free, double points-scoring finale.

A downpour on Sunday morning resulted in the full adoption of Dunlop’s Sport BluResponse wet tyre throughout the field. BTC Norlin Racing’s pairing of Chris Smiley and Dan Lloyd revelled in the conditions to gain 14 positions apiece from their respective grid slots of 21st and 23rd to top the race one movers’ list.

The second race saw further status quo in terms of tyre allocation. A wet opener, and the Prime-only allocation for the ‘Diamond Double’ meant teams had to run their Option-Softs in Round 17.

As track conditions improved and a dry line began to form, lap times tumbled by more than eight seconds, showcasing just how wide a window in which Dunlop’s Option rubber can operate.

Speedworks Motorsport’s Tom Ingram surged from 27th to third, gaining 24 positions on the way to what had looked an unlikely podium at the start of the race and ensuring he’d be top of race two’s #ForeverForward running.

Ciceley Motorsport racer Tom Oliphant produced some eye-catching manoeuvres mid-pack, including a stunning pass around the outside of former BTCC champion Andrew Jordan.

After falling down the order to the back of the grid in race two, through no fault of his own, the DUO Motorsport with HMS Racing Alfa Romeo of Rob Austin surged early on in the ‘Diamond Double’, with the Evesham racer making up 14 positions in two laps, leaping from 24th to 10th.

Ant Whorton-Eales gained 15 spots, contributing to a table-topping 31-place gain over the weekend as he clambered up the order from 30th in Qualifying 1 to a top ten finish with 10th come race two – sealing weekend #ForeverForward honours ahead of Senna Proctor (27) and Ingram (25).