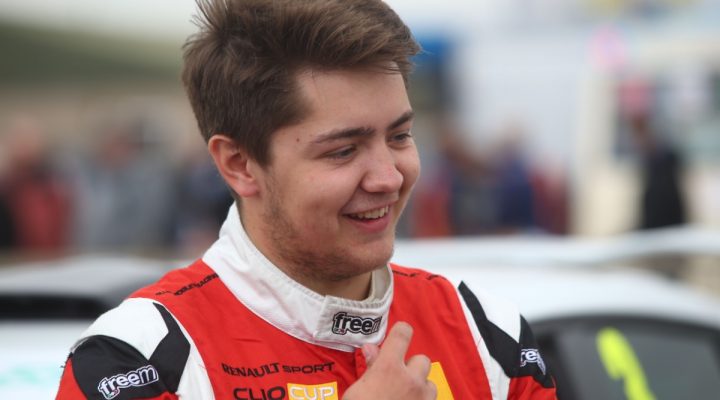 Trade Price Cars with Brisky Racing has announced that Ollie Pidgley will step into the fold at the Team HARD-backed outfit from Rockingham this weekend, with the 20-year-old signing a deal that runs until the end of the 2018 Dunlop MSA British Touring Car Championship.

Pidgley is no stranger to the TOCA package, having competed in the Renault UK Clio Cup in both 2016 and 2017 before shifting to Mini Challenge Great Britain for 2018.

With the opportunity to step up to Britain’s headline championship proffered to him by Team HARD Team Principal Tony Gilham, in place of Dan Welch, Pidgley jumped at the chance.

“The move came about quickly, as these things often do! I spoke to Tony (Gilham) and it’s an opportunity I just had to grasp,” said Pidgley.

“It’s always been a dream of mine and locking in four BTCC race weekends is an unbeatable chance for me. I’m really, really looking forward to it. I’ve got everything in place and I’m ready to go.

As part of Ciceley Motorsport’s junior set-up back in 2016, he was given a day in NGTC machinery at Silverstone and has had a taste of what to expect this weekend as he takes to Team HARD’s Volkswagen CC.

“I sampled BTCC machinery back in 2016 when I was awarded a day’s seat-time with Ciceley Motorsport at Silverstone, having been a part of its Renault UK Clio Cup outfit that year.

“Purely in terms of that being front-wheel drive machinery, and a sequential box, it was a similar feel to what I’ve been used to.

“Obviously, there’s a step, in terms of performance and with the tyre but I feel physically ready. Procedurally, regarding sessions and the structure of a weekend, things will be different but adjusting to that won’t be a problem.”

“I’m going to just go about my business and see how we fare. I am not setting myself any specific targets at this moment.

“We want to set our goals as we go along and improving weekend-by-weekend has to be the aim.

“Clean races, getting seat time and bringing the car home will be our first thought. Rockingham’s a place I like and probably the circuit I know best. I’ll do my own thing and see where that takes us.”

“For me, this is a precursor to achieving a full campaign in the BTCC. I know the cars are coming on a lot at Team HARD and they made a step at the last one with Bobby raking in good points and showing strong pace.

“I know Bobby well and I know he is quick. I’ll be looking to glean information where I can and I know with the way Tony runs things I’ll settle quickly.”

Gilham’s Team HARD is renowned for offering talented young racers the chance to step into the fold and continue their development at what is an established outfit operating within the UK’s premier motorsport series. With Pidgley’s signing, that philosophy continues.

“It’s a change that’s come about very quickly but we’ve been aware of Ollie for a while,” said Gilham. “Bobby (Thompson) and Ollie are close, and they share a similar profile – they’re both young, hungry and up-and-coming drivers that deserve a chance in Britain’s top-tier championship.

“The conversation was an easy one for us to have, and he’s in the seat for the remainder of the season.

“As an outfit, we’ve always been willing to back young talent and we’ve played a part in developing the careers of several drivers who’ve gone on to prove themselves as very capable racers. The likes of Aiden Moffat, James Cole and Jack Goff have all been a part of the Team HARD stable and have gone on to become race winners in the BTCC.

“We were sure we’d made a good step forward with the car at Snetterton, and with Bobby scoring a top ten finish and double points in the ‘Diamond Double’ we were vindicated in our efforts. His pace was right up there too over the course of the weekend. We’re looking for more of the same from our quartet going forward.”