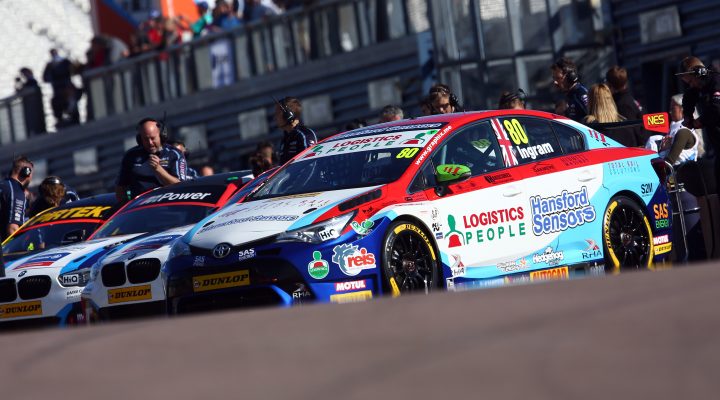 Ingram moved to the standings summit after a storming recovery at Snetterton last time out, which included an outstanding drive from 27th to second in the second race. He followed that up with another podium in the ‘Diamond Double’ and his Independent champion squad is seemingly in fine fettle again this weekend.

“The car felt really good and we’ve been working hard on it since Croft to get it back to where we are now and where we’ve wanted it to be,” said Ingram. “We’ve been working on it from Round 1 and we’re now in a place where things feel really good. It’s hard on tyres here and the weather looks like it may play a part in the mix tomorrow, so we’ve got to make the most of today.

“I’m more than happy in the wet, though. I know we’ve got a good car. It’s really slippy here in the wet but it might do us a bit of a favour with the 75 kilograms of success ballast on board. It might be a bit of an equaliser and lead to a better result.”

Austin left it late to clock his best time in FP1 but the ever-improving DUO Motorsport with HMS Racing Alfa Romeo was good enough to claim second place. Sam Tordoff meanwhile – still sporting his bright pink livery on the Motorbase-run Ford Focus – is looking to continue his run as the highest placed average qualifier this season, and his early pace suggests he should be a contender later this afternoon.

Andrew Jordan was fourth fastest in the BMW Pirtek Racing car, whilst Ciceley Motorsport’s Adam Morgan will be looking to bounce back to form after a tricky last few events at Croft and Snetterton. Mercedes man Morgan led the championship going into his home event at Oulton Park back in June, but his fortunes have taken a turn for the worst ever since – fifth place here in the opening practice session will at least be a boost for his confidence.

Mike Bushell was sixth in the Team HARD-run VW, with Sam Smelt’s Audi and Josh Cook’s Vauxhall next on the timesheets. Such is the competitiveness in the BTCC field that eight different marques were represented in the top eight lap times.