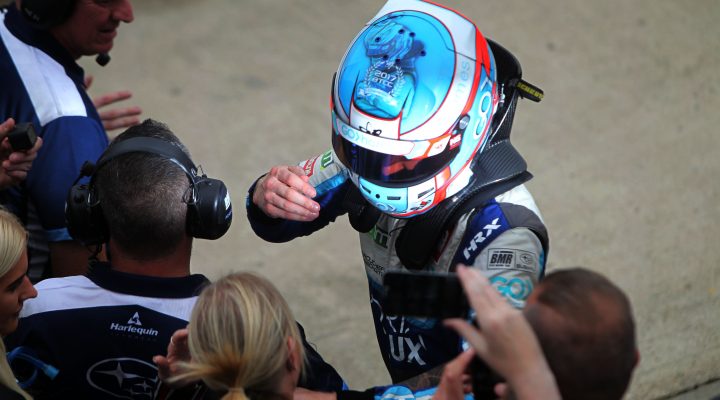 Ash Sutton won the second BTCC encounter at Rockingham while Tom Ingram returned to the standings summit with yet another sensational comeback drive.

Pole-sitter Adam Morgan lost the lead to Sutton off the line but he was able to defend second from Chris Smiley’s BTC Norlin Racing Honda and Mike Bushell’s Team-HARD run VW.

Morgan kept Sutton honest throughout but was never really close enough to make a concerted effort to get by, with both drivers seemingly content with the top two positions.

Yet again it was the final podium position that created the most excitement with Ingram incredibly grabbing the place late on after a storming drive from 27th on the grid.

He had already picked off rival-after-rival before he blasted by then championship leader Colin Turkington to take fifth on lap 15. Both of those then muscled their way past the impressive Bushell, so it was Ingram and Turkington in fourth and fifth with just a couple of laps remaining.

Senna Proctor’s Power Maxed TAG Racing’s Vauxhall was hanging on to third but when he ran across the grass through Brook for the second time, Ingram spied his opportunity and nipped through.

When the dust settled on yet another breathless contest it is Speedworks Motorsport’s Ingram leading the standings by three points from Team BMW’s Turkington, whilst reigning champion Sutton sits closely behind in third.

Ash Sutton said: “It was like re-living Race 2 at Snetterton. We made the right call on tyres at the last minute. We’d gone on wets and we started on stone cold dries – everyone else had a couple of sighter laps to warm up. It’s very much like last year how things are playing out so far this season – better late than never! We’re getting there with the car in race trim and we’ve got something. The Adrian Flux Subaru Racing guys have done a great job. We were third after Race 2 at Snetterton but finished up seventh, it’s an indicator of how quick things can change so we’re not counting any chickens.”
Adam Morgan said: “When you’re carrying 75 kilograms I thought it’d be a bit more difficult than that. Ash (Sutton) got the start he wanted and was leading the way into the unknown. He disappeared once his tyres were up to temperature. We know our car’s quick with weight. We’ll see what we get with the reverse grid draw as to where we can go in Race 3.”
Tom Ingram said: “There’s a lesson in this: don’t let yourself get beaten up, don’t let your head go down and look at the positives in any situation. For all the negatives you get, every so often you get a real positive and you can have some fun coming through from the back like that. I got to 12th pretty early on and my engineer said ‘you’ve got the rest of the race to do the rest of it’. For the second weekend running, we’ve had to do the same thing but credit to the lads. We were up against it after Race 1 and we only just got the car back out ahead of Race 2. Thanks to everyone at home for the messages of encouragement again. It really helps.”