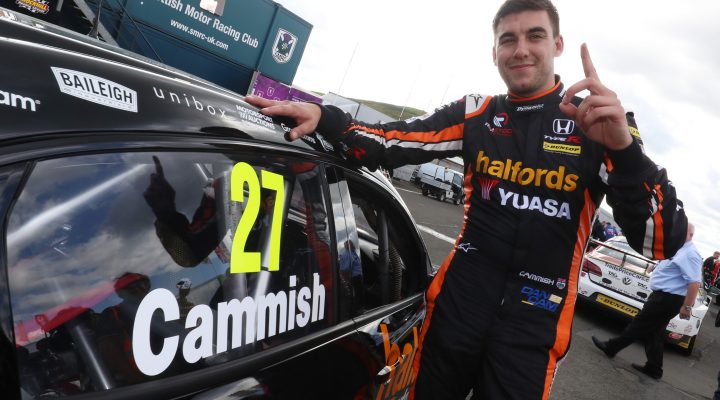 An incredible front row at the Fife track is completed by Team Parker Racing’s Stephen Jelley, who himself held provisional pole with just minutes of the session remaining. Three drivers clocked lap times in the 50 seconds bracket with BMW Pirtek Racing’s Andrew Jordan following close behind the lead duo.

The ever-improving Jelley was the first to dip under that benchmark and the BTCC race winner then went even quicker still in his BMW 125i M Sport, but not before Honda’s Cammish had recorded a hugely impressive 50.929s lap time. Jelley eventually fell short by just 0.023s with Jordan only 0.051s off the ultimate pace.

In truth, the top trio were streets ahead of the chasing pack although championship leader Colin Turkington was delighted to be the ‘best of the rest’ in his Team BMW car. The double champion – carrying maximum success ballast due to his standings lead – produced his own heroics to set the fourth fastest time ahead of Rockingham race winner Chris Smiley in the BTC Norlin Racing Honda.

Toyota star Tom Ingram will line-up sixth on the grid for tomorrow’s opener after the Speedworks Motorsport driver featured at the sharp end of the leaderboard throughout, albeit whilst also spending considerable time in the pits as his squad carried out work on the brakes of his Avensis.

Ciceley Motorsport enjoyed a solid day at the tight and twisty Scottish track with the Mercedes pairing of Tom Oliphant and Adam Morgan setting the seventh and ninth best times respectively, with reigning champion Ash Sutton wedged between them on the timesheets in his Adrian Flux Subaru Racing Levorg.

There was a long stoppage just five minutes into the 30-minute session when Bobby Thompson’s Team HARD VW dropped oil all around 1.27-mile circuit, which required a clean up operation by marshals and the TOCA Safety Team. Whilst the action was able to resume after a significant delay, Thompson was unable to get back on track and record a time.

Rounds 22, 23 and 24 of the 2018 Dunlop MSA British Touring Car Championship will take place at Knockhill tomorrow with rain expected to descend on the area. A huge crowd is still expected to arrive at the circuit whilst many more will watch the action live on ITV4 from 11:00am.

Dan Cammish said: “I don’t know what to say – I’m a bit speechless. I want to cry and show the emotion but I’ve got to keep it under wraps – the new Dan! I had that feeling at Brands Hatch where I knew I couldn’t drive a better lap. I just thought please let that be enough here today and it was – I’m so thankful. Stephen Jelley’s so close! At Snetterton I thought I did enough too and it didn’t happen, I just thought what do you have to do in this championship to get a pole? I’m so pleased for us all, at Gordon Shedden’s circuit too. Qualifying’s the purest you’ll get, it’s the best you’ve got against the best they’ve got. I know I can come across as angry and frustrated but this makes up for it. I’m over the moon now. It’s nice to see my smile isn’t it!”

Stephen Jelley said: “That’s great. The car’s great. We struggle in a straight line but the car balance around here is fantastic and over the kerbs it’s great fun. We did a bit of sim work before we came and that put me in a good mind. The car’s been quick from the first lap and it was just a matter of getting it right. I knew we were quick and I didn’t want to mess it up and end up 20th. It was about getting a top ten in the bag and then pushing it. We’ll be good off the line and take it from there. Anything’s a bonus. My best so far’s 14th so we’re aiming to outdo that!”
Andrew Jordan said: “I’m so annoyed and disappointed. It was a scrappy session but the same for everyone. My lap felt very average if I’m honest. It equals our best qualifying of the year but I’m so disappointed in it. We left a lot on the table. With the track having been resurfaced we’ll see what we can do tomorrow and get our heads together overnight.”