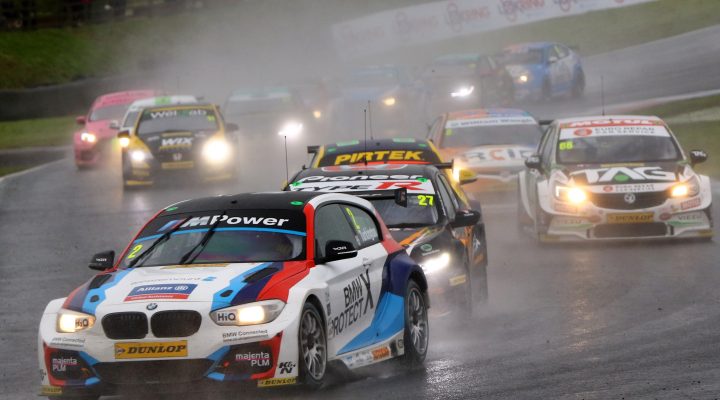 Team BMW’s Colin Turkington has extended his advantage in the Dunlop MSA British Touring Car Championship standings after a double podium and a fourth place finish at Knockhill, as his title rivals hit trouble on a dramatic day of action.

Sutton’s promising looking race day somewhat unravelled after his victory – along with fellow championship contender Tom Ingram – when both were excluded from the race two result for a technical infringement, whilst wins for Jordan and Chilton have already confirmed 2018 as a record breaking BTCC season.

The 2017 BTCC campaign produced 13 different race winners, which was a new record high, but 2018 – which also marks the 60th anniversary of Britain’s biggest series – has set a new benchmark in the illustrious history of the much loved tin-top championship as Jordan and Chilton became the 13thand 14th victors of the season.

Adrian Flux Subaru Racing’s Sutton surged from eighth on the grid to grab a glorious win in the opening contest.

Pole-sitter Dan Cammish held the advantage off the line as the Honda Civic Type R showed good pace in the early running.

The Team Parker Racing car of Stephen Jelley swapped positions with the manufacturer-backed BMW of Turkington no fewer than three times as both drivers endured slippery moments in the heavy rain. It was an exciting tussle that built towards an unfortunate crescendo, when the two cars touched and Jelley’s podium hopes ended in the gravel on lap 19.

Sutton was already ahead at this point as he made light work of the BMWs ahead of him, before he scythed past then leader Cammish in the Halfords Yuasa Racing car.

Cammish fell into the clutches of the Bavarian machines after that and had little defence, but he was able to get himself back on the podium after the Turkington/Jelley collision.

Treacherous conditions – and a number of incidents – eventually put paid to an exciting second race, which Sutton led on the road from start-to-finish.

The reigning champion had to contend with two safety car periods as a number of drivers struggled on the slippery surface with heavy rain falling throughout.

Ollie Jackson’s Audi was the first casualty as the mid-pack bunched up on the opening lap and then a further delay followed when Tom Oliphant’s Mercedes and Carl Boardley’s VW both slid off-track.

The race was eventually red flagged after 20 laps when Sam Smelt’s AmD-run Audi A3 went straight on at the chicane and made heavy contact with the barrier. Smelt emerged completely unharmed but the decision was made to stop the race early.

Sutton took the chequered flag ahead of Ingram and Jordan, but further drama followed during post-race scrutineering.

The Subaru Levorg of Sutton and Toyota Avensis of Ingram failed ride height checks and were subsequently excluded from the result, handing victory to Jordan with Power Maxed TAG Racing’s Josh Cook and Cammish completing the podium.

Chilton then became the 14th different race winner in 2018 so far – an all time record number with six races of the season still remaining.

It was the maiden victory of the season for the Motorbase stable and also Chilton’s first overall success since re-joining the series at the beginning of last year.

Turkington was arguably the biggest winner in the final race as a second place finish extended his championship lead over Ingram and Sutton, who both produced good comeback drives to finish 16thand eighth respectively.

BMW Pirtek Racing’s Jordan rounded off a brilliant Knockhill weekend with another podium, following on from his race two victory. The 2013 champion also proved to be the highest points scorer across the three races.

Turkington now holds a 43-point lead over Ingram with Sutton a further eight in arrears.

The Dunlop MSA British Touring Car Championship returns at Silverstone in three weeks’ time (15/16 September) before the season finale takes place at Brands Hatch at the end of the month.

Colin Turkington said: “It’s been my strategy just to consistently score. Two podiums and a fourth is a great haul. You get to this stage of the season and the race weekends don’t follow a predictable pattern. Anything can happen at any given time. I’d rather have the points in the bag than go chasing them. It’s been a great day for BMW all-round, too. Whether the tracks suit you or not is almost beside the point now. You’ve just got to keep plugging away and fighting for points. You’ve seen today that results can be taken away through nothing to do with your driving.”

Ash Sutton said: “I’ve always gone well in the rain. When I was in the MG I shone but the Adrian Flux Subaru Racing guys have done a great job with this. I didn’t expect that from where we were but there are a lot of laps. You just have to pace yourself and see what you can do. I do have to take risks to catch up to Colin (Turkington) and Tom (Ingram) but those risks paid off in race one. It’s going to be a difficult title defence after what happened in race two though. We’ve just got to keep pushing and pushing. I’d rather come out of this championship having pushed too far than not having gone for it.”

Andrew Jordan said: “That was wet. It was hard work. The track was at that slimy stage and I probably hurt the rears a little bit and I might not have had enough to go after the lead couple. A fourth, a third and a win is a good effort and I’m happy with that. Coming off the back of a tough weekend at Rockingham I wasn’t too despondent. I’ve been here long enough to know not to dwell on it. When my day comes, I’ll have a good day – I knew that.”

Tom Chilton said: “I’m so happy for everybody at the team. They’ve worked so hard and it’s finally come good. It’s our fifth podium this year and we just kept missing out on the win but we’ve got it. I love these conditions when it’s greasy and horrid and I love Knockhill. To win here again is great. I’m very happy. It’s such a silly thing. Points make prizes but it’s something about getting the win and it’s why we go racing for these little highs. Spray the champagne as hard as you can and get those trophies up high on the mantlepiece.”

Mickey Butler, Manager, UK and One Brand Motorsport Events, said: “It was a difficult weekend for all the drivers, but the Dunlop BluResponse held up in very tricky conditions. It never favoured one chassis or drivetrain, it worked perfectly on everything!”