Chilton puts Motorbase back on the top step 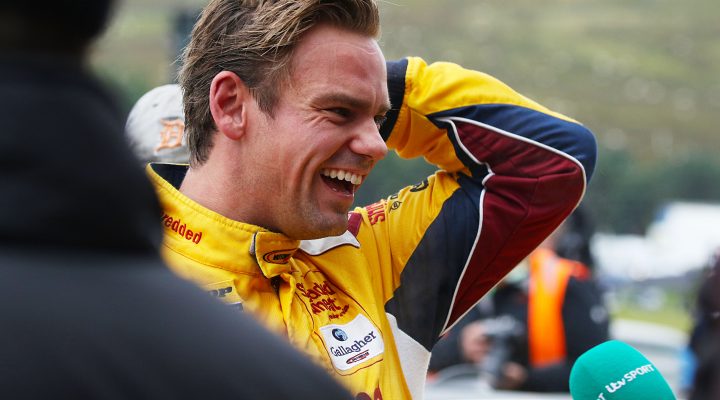 Team Shredded Wheat Racing with Gallagher saved its best until last at Knockhill, with Tom Chilton claiming a maiden race win of the season for the Motorbase-run squad with a commanding lights-to-flag drive in the final Dunlop MSA British Touring Car Championship round of the day this past Sunday.

The relentless rainfall did little to dampen Chilton’s spirits with the Gallagher-backed racer battling his way from a mid-pack start to take his first BTCC race win since 2011, and second Independent win of the season.

The weekend was a slow-burner for the Team Shredded Wheat Racing with Gallagher duo. Following a super-competitive qualifying session that saw over half of the grid beat the previous lap record, Chilton was the highest-placed Motorbase driver in 15th – in spite of being less than half-a-second off pole – with James Cole placing 22nd for the first of Sunday’s three races.

Passing Lloyd’s Honda on the opening lap in the extreme wet conditions, Chilton held his nerve in the safety car interrupted race and continued to scythe his way through the mid-field to eventually take 12th at the flag. With a tough task ahead of him on the notoriously difficult circuit, Cole endured a tough battle from a less-than-ideal qualifying place, picking up damage to bring the number Focus RS home 24th.

Race two was a dramatic affair, eventually red-flagged after just 20 laps given a first-corner off for Sam Smelt in the AmD Audi and worsening conditions. Chilton made an excellent start and had managed to work his way into the top ten by the first tour of the circuit, moving up to eighth by lap 12 before the race was ended. Cole was embroiled in the mid-pack scrap and struggled to progress but managed to make up four places to finally cross the line in 20th.

With the leading two cars excluded from the race results due to ride-height infringements, Team Shredded Wheat Racing with Gallagher’s drivers were promoted to sixth and 18th. Chilton’s amended result proved to be the turning point of the weekend, placing the number three Ford Focus RS onto pole position for the final race of the weekend.

Determined to capitalise on his fortuitous position, Chilton stormed off the line and had built up a decent lead over Adam Morgan in the opening laps. A fast-charging Colin Turkington made it beyond the Mercedes man and had closed the gap to Chilton to less than half-a-second by the mid-way point of the race. A defensive masterclass followed, with Chilton holding off the two-time BTCC champion’s BMW for the final six laps. The 33-year-old’s determination and race-craft delivered the perfect end to the day for the Motorbase squad – claiming the first outright race win for the Ford Focus RS in its debut season.

Unfortunately, Cole’s woes continued with the 30-year-old entangled in the back-marker traffic he dropped back a couple of places to end the day in 22nd.

The weekend’s results helped to reinstate Chilton’s championship fight, moving him into sixth place overall and closing the gap on the Independent Drivers’ standings lead. Team Shredded Wheat Racing with Gallagher has also consolidated its fourth position in the overalls Teams’ running – as the highest-placed Independent team – and it has closed the gap to the current Independent Teams’ standings leaders to just four points with six rounds remaining.

Team Manager Oly Collins said: “That was a fantastic result which pays back the whole team for all the hard work behind the scenes. Tom was mega in the wet today and that first win for our Focus RS was exactly what he and the team deserved. We’ve had a strong car all year but for whatever reason we’ve just not been able to convert it to a win until today.

“It’s a super competitive championship and you just can’t underestimate what it takes to win races. It keeps us in the hunt for the title. Now we’re hungry for more with six races left!”

“I knew I had to get the perfect start because I had Turkington behind me in the rear-wheel drive and I did!” said Chilton. “Thankfully I didn’t make the same mistake from Rockingham and I kept the lead for the whole race. I knew that I had the car underneath me and with the experience from all of my years racing here it paid off. It was a really big fight at the end, with Turkington coming through but we had such a good car.

“All credit to the team giving me the car to do the job. Starting from 15th on the grid was tough but it just shows you that if you keep your nose clean and with a little bit of luck you can come through to take a win.”

James Cole added: “Congratulations to Tom on his win. It was a fantastic effort from the whole team and he drove really well to take that win. I think overall the result doesn’t show it, but we have found some improvements in the car which we can take forward to Silverstone. Some more consistent running is what we need, and to have two days of the same weather would be lovely. We’re upbeat for Silverstone, it’s a great circuit that should suit our car really well and it can’t come soon enough.”