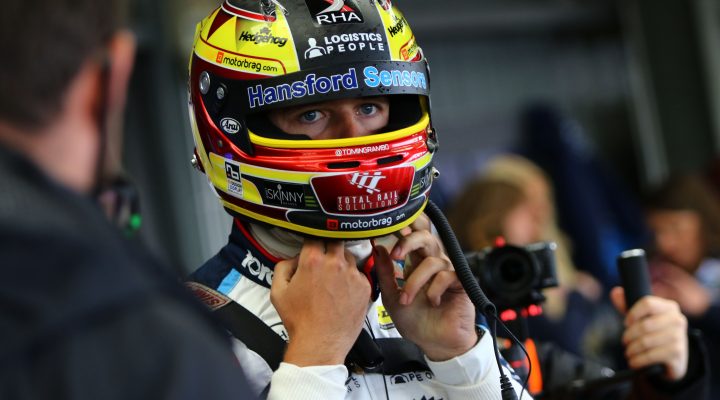 Tom Ingram has promised to ‘fight to the end’ in the chase for the 2018 Dunlop MSA British Touring Car Championship crown, after what looked set to be a big points-scoring weekend north of the border at Knockhill was undone by a technicality.

With 66kg of success ballast in his Speedworks Motorsport Toyota at a circuit that leans towards favouring rear-wheel drive machinery, Ingram managed sixth position in qualifying.

After toughing it out wheel-to-wheel with the fast-starting Sutton through the first few corners of the opener, made it beyond the BTCC’s newest winner Chris Smiley and remained in the podium scrap throughout, going on to take the chequered flag in the same position as he had started. It was Ingram’s sixth Independents’ triumph of the season.

Race two was punctuated by safety car interventions for multiple accidents further down the order, ultimately being halted seven laps early due to the deteriorating conditions. In the ten laps of action that did take place, however, Ingram demonstrated strong pace, rising four places to take second at the chequered flag.

Unfortunately, Ingram, in company with race-winner Sutton – was excluded for failing the post-race ride-height check, demoting the pair to the rear of the grid for the day’s finale.

Ingram dug deep and fought through the field to cross the finish line 16th.

“I think you’d have to classify that as a real missed opportunity of a weekend,” said Ingram. “Knockhill was always going to be about damage limitation for us and we feared we might struggle a bit, but it’s fair to say we surprised ourselves in terms of our performance.

“We’ve lost touch a little in the championship, but the final couple of tracks should suit the Toyota well. We’ve won at Silverstone in each of the last two seasons and gone well at Brands GP too, so we’ll go there in confident mood and fully focussed on clawing back the ground we’ve conceded.

The two non-scores mean he’s slipped 43 points adrift of Turkington at the summit of the overall Drivers’ standings but he continues to lead the way in the defence of his hard-earned Independents’ Trophy.

“Rules are rules and we obviously have to accept what happened, but it’s immensely frustrating to lose so many points for such a minor infringement,” reflected Team Principal, Christian Dick. “After that, progress was always going to be difficult in race three with 66kg from the back of the grid, but Tom did everything he could with another fantastic drive and deserved a lot more than he got out of the weekend.

“It’s important to focus on the positives, though, and there are a great many to take away with us. We thought we would struggle even to crack the top 15 in qualifying at Knockhill, so to line up sixth and then really take the fight to the rear wheel-drive boys in races one and two massively exceeded expectations.”