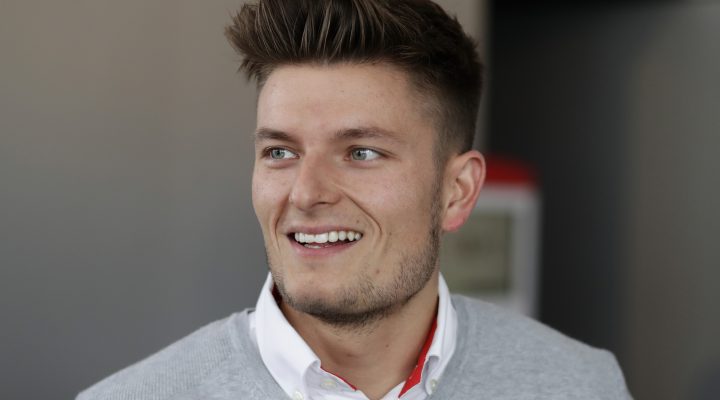 Caygill will compete for the West Thurrock-based team in the meetings at Silverstone and Brands Hatch, in place of Glynn Geddie, as team-mate to Rory Butcher in what will be his first foray into the BTCC.

The 29-year-old, from Holmefirth in Yorkshire, makes the move into the BTCC having enjoyed a varied career to date having initially competed on two wheels – including two years racing in the highly-competitive British Supersport Championship.

Switching to four wheels in 2013, Caygill went on to compete in the Volkswagen Racing Cup and the DTM-supporting Audi Sport TT Cup before moving into sportscars in 2017 with Team WRT in the Blancpain GT Endurance Cup.

This season, he has been competing in the Blancpain Sprint Series in a Team Parker-run Bentley Continental GT alongside former BTCC racer Aron Taylor-Smith, with the pair taking victory in the Silver Cup during the British round at Brands Hatch back in May.

Caygill has had the opportunity to sample the MG – ironically the same car that Taylor-Smith raced in the series last year – during a day of testing at Snetterton and will now hope for a solid race debut when he hits the track at Silverstone this weekend.

Team-mate Butcher heads for Silverstone hoping to maintain an impressive run of form that has seen him finish in the top ten in the last six races.

The Fife racer showed strong pace at both Rockingham and Knockhill and heads into the penultimate meeting of the campaign seeking to cement his position in the top of the eight of the Independents’ Trophy standings.

The main focus for the Scotsman heading into the weekend will be to try and improve his qualifying performance, which in turn will give the 31-year-old the opportunity to maximise his results on race day.

Having finished on the podium numerous time at Silverstone in the past, and with confidence on a high, Butcher will seek to try and push well inside the top ten to at least match his previous best result of sixth place.

“I’m over the moon to have agreed a deal to join the team for the final two rounds of the season,” said Caygill. “The BTCC is a series that I have wanted to compete in for a long time but the right opportunity has never come along before. When this chance arrived, I grabbed it with both hands.

“Having had chance to sample the MG last week, the car felt really nice, even though the rear end was a bit lively, and it was good to be back in front-wheel drive having spent the last few years in GT machinery.

“I’m open minded about the weekend ahead and my only aim is to go out there and do my best. I want to enjoy myself and if we come away from Silverstone with a good result on the board, then I’ll view it as a bonus at this stage

“For me, these two rounds are an opportunity to see what the BTCC is all about and if it works for both me and my sponsors, then it is certainly something I’d look at for 2019.”

“We head to Silverstone on a high after our results in the last two rounds and I’m looking forward to the weekend as Silverstone is a circuit I really enjoy,” said Butcher. “It’s also one that I think should suit the MG, which leaves me feeling confident about picking up more strong results.

“We know we still need to try and extract more from the car in qualifying but whatever happens on Saturday, we have shown we have a strong race car that we can use to push forwards on a Sunday.

“We are scoring good points at the moment and are approaching 100 in the overall standings, which will be a great achievement for us. We have to keep being consistent and see where we can end up after these final two rounds.”

Shaun Hollamby, AmD with AutoAid/RCIB Insurance Racing Team Principal, said: “We’re delighted to welcome Josh into the team for the final two rounds of the year. He has shown himself to be a very capable driver in everything he has done in his career so far, and brings a wealth of experience having competed at a high level in Blancpain GT and also on the DTM support bill.

“He drove very well in the test last week given that he was running on old tyres and it was his first time in the MG, and we certainly feel he is a driver who is capable of bringing home some solid results. The additional weight as a new driver will be a challenge this weekend, but all we are looking for from him is to stay out of trouble and learn as much as he can.

“Rory heads to Silverstone in a rich vein of form after his strong results at Rockingham and Knockhill and we are hopeful he can maintain that kind of form this weekend. It’s clear to see that we have a strong race car, so we need to focus on trying to get more from it in qualifying to give him the best possible opportunity to pick up a big haul of points this weekend.”