Oliphant edges out Bushell in FP1 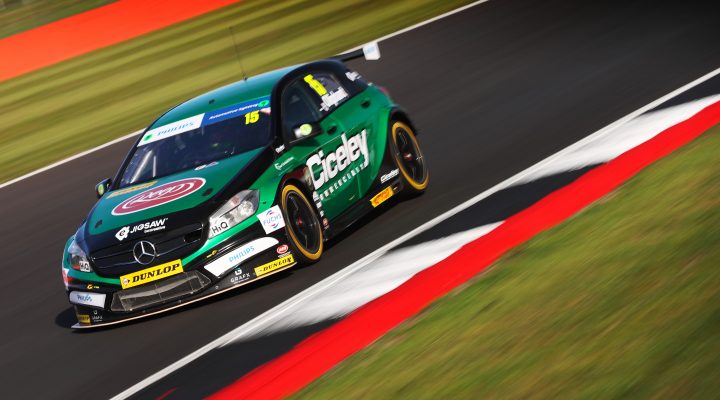 “I’m really pleased with that,” said Oliphant. “It might only be free practice, but to top the timesheets for the first time in my BTCC career is a brilliant feeling.

“It’s another new circuit for me in front-wheel drive machinery, but the Ciceley Motorsport Mercedes was superb and I got into a good rhythm from the off. We’ve got a great base to build on for the weekend ahead.”

The DUO Motorsport with HMS Racing Alfa of Rob Austin rounded off a different look to the top three as the main title contenders seemingly settled gently into the penultimate race weekend of the season.

The 40-minute session was relatively free of any incidents with most of the quicker lap times being set early on.

Andrew Jordan’s Pirtek-backed BMW was the first of the leading protagonists to show its credentials with the 2013 champion ending up fourth overall at the finish.

The WIX Racing with Eurotech duo of Brett Smith and Jack Goff were evenly matched as the Honda Civic Type R pair set the fifth and sixth fastest times respectively.

Manufacturer-backed machines from Honda, Subaru and Vauxhall were next in the order with Dan Cammish, Jason Plato and Josh Cook clocking solid efforts in the opening exchanges, whilst Aiden Moffat confirmed the prowess of the Mercedes A-Class by completing the top ten positions.

Championship leader Colin Turkington could only manage 19th for Team BMW, although his main challengers were not that far ahead of him with Speedworks Motorsport’s Tom Ingram in 12th and Adrian Flux Subaru Racing’s Ash Sutton in 17th.

The main event of the day comes later of course, following the second and final Free Practice session, when qualifying commences at 15:15. You can keep up to date with the latest news right here and via the BTCC’s social media feeds, whilst qualifying will be streamed live and exclusively at www.itv.com/btcc.