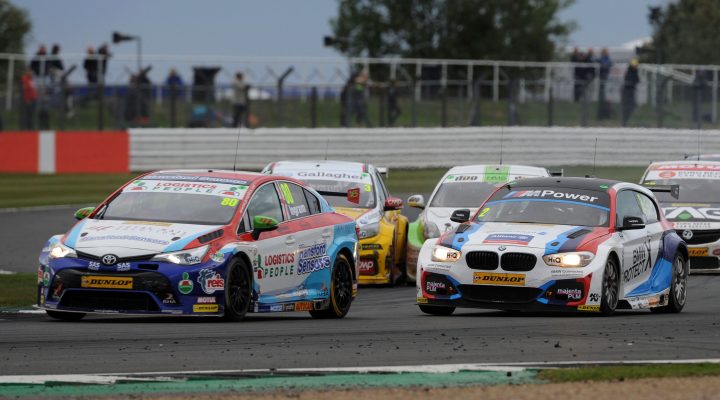 Tom Chilton is the only other driver to remain in mathematical contention for Britain’s most coveted motorsport crown after the Team Shredded Wheat Racing with Gallagher driver enjoyed a strong weekend in Northamptonshire.

Tordoff led home a Motorbase Performance one-two – the outfit’s first since Thruxton 2010 – ahead of stablemate Chilton, whilst Ricky Collard completed a hugely popular podium in the opening race.

Team GardX Racing with Motorbase driver Tordoff made a good getaway from pole position, but immediately came under attack from the fast starting BMW of Collard. The young rookie pushed too hard on the run down to Copse for the first time, however, running his BMW 125i M Sport wide on the exit of the corner.

Collard dropped to fifth as Chilton slipped into second in the Shredded Wheat-backed Focus, with BMW Pirtek Racing’s Andrew Jordan and WIX Racing with Eurotech’s Jack Goff now in third and fourth respectively.

The final place on the rostrum changed hands on two occasions when power problem for Jordan’s forced him out of contention, before Collard passed Goff around the outside to move into third in the latter stages.

The fight for victory was always close but Tordoff fended off the attentions from Chilton to grab his first win of the season, whilst Collard’s maiden podium was met with huge celebrations from his Team BMW squad.

Speedworks Motorsport’s Ingram produced one of his trademark drives through the field to win the second race.

The Toyota star has previously displayed his fighting spirit with efforts from the back of the grid to the podium at both Snetterton and Rockingham, and this one will also live long in the memory as he blasted from 15th to first in the blink of an eye. A ballast-free Avensis running of the softer Dunlop SportMaxx tyre compound is often a lethal combination, and so it proved around the 1.64-mile National circuit.

Having already seen off a number of rivals, Ingram made a breathtaking move for second spot as he passed both Chilton’s Ford and Adam Morgan’s Mercedes in one go. He reeled in Tordoff’s Team GardX Racing with Motorbase Ford Focus and nipped by with relative ease before pulling away to take his third win of the year. Morgan and Tordoff completed the podium.

The #16 Mercedes-Benz of Moffat became the 16th different race winner in this year’s BTCC after the Laser Tools Racing driver topped a pulsating six-way battle in the final race.

Moffat – the youngest driver in BTCC history when he made his debut at 16 – dealt with intense race long pressure from some of the world’s most experienced tin top drivers to claim a phenomenal lights-to-flag victory.

The enthralling contest also included a brilliant scrap for second with the championship top two – Turkington and Ingram – vying for position.

Ingram held second for the latter part of the encounter but he had Turkington’s Team BMW 125i M Sport swarming all over him during the final laps. Minor contact ensued as Turkington went side-by-side with Ingram’s Toyota, but the Speedworks Motorsport man held on to claw back more points on his main championship rival.

With the penultimate event of the BTCC campaign now complete, Turkington, Ingram and Chilton will head into the season finale challenging for one of the most famous trophies in motorsport.

BMW maintained its lead in the Manufacturers’ and Teams’ standings, whilst Ingram and his Speedworks squad boast a slender advantage in the Independents’ categories.

Round 28, 29 and 30 of the Dunlop MSA British Touring Championship will conclude the season at Brands Hatch on 29/30 September.

Colin Turkington said: “I’ve been here before and I’m really enjoying it this year. Last year, I was the one doing the hunting, trying to claw the points back on Ash (Sutton) but I wasn’t really getting there, and that’s where you start taking risks. I enjoy these moments, it’s what we live for. I’m so determined this year that it’s coming home to me, especially after last year. We’ve turned it right around from 18th yesterday to a podium today, so I’m delighted. The instinct is go forward and beat Tom (Ingram) in a square fight but you’ve got to be sensible. The BTCC is such that the stars have to align if you want to win the championship. Fate has to play its cards. No matter how hard I fought last year, it wasn’t coming to me. I hope that this is the year. I’ve got real determination. It’s doesn’t matter that I’ve won it twice. I’ve got a lot of people to do it for and a lot of reasons.”

Tom Ingram said: “I was mindful of not putting myself in a vulnerable position. I knew Aiden (Moffat) was desperate for a win and rightly so. The only place I could have a little look at him was going down into Brooklands. I was trying to put myself into a position but if I went to the inside, Colin (Turkington) was going to do the opposite. I had to go to the outside and put Colin into the gap. Aiden started to go back and I was hoping he wouldn’t back me into the rest. It was a hugely important day for us. We’ve closed the gap down and it’s onto Brands Hatch now. I knew Colin was going to come at me. We had our elbows out! We’re in the best shape possible. You’d say we’ve got the strongest car. We’re lighter on weight and we’re in the driving seat. Colin’s got it all to lose and we’ve got it all to gain. We’ve gone well at Brands in the past. We took 42 points out of Colin in the last two races. We can do it, it’s just a case of putting it all together next time out.”

Sam Tordoff said: “It was long overdue! The first job was getting a good start because I knew Ricky (Collard) would be quick off the line, and then I settled into a rhythm. I made it difficult for myself when I stuck a wheel on the gravel and let Tom (Chilton) in. I knew in my head what I wanted to do but I’d be lying if I thought it would go quite that well. Tom was racing for the win but we kept it clean. I knew from the body language of Tom’s car that he was trying and we had no team orders. I am delighted to have finally got a win this season.”

Aiden Moffat said: “I’ll sleep tonight, that’s for sure. I looked at the timesheet and I was confident I would get away. I had a feeling Ingram and Turkington would be there at the end but they got there a lot sooner than I hoped. It’s a track we struggle at, so to win here is a bit emotional and special. I’ve had to fight for it. There has been a few tears after that one. It meant a lot after the way things have been going recently. I’ve put a lot of work into this weekend. I was determined to bounce back to reward everyone for their efforts. There’s a few drivers you don’t want to see behind you and Tom’s definitely one of them!”

Mickey Butler, Manager, UK and One Brand Motorsport Events, said: “We were heading a little into the unknown this weekend with regards to the new surface but naturally, I spoke to my colleagues in MotoGP and WEC which gave me a bit of insight. The delta between the two tyre compounds was as expected and hurt each driver individually at some point over the day, which spiced up the races. Overall I’m very pleased, we take some learnings from the event to see where we can improve for next year.”

From Knockhill:
Carl Boardley was excluded from the results of qualifying and Rounds 22, 23 & 24 with a forfeit of 40 points from all championships concerned for a technical infringement

Weekend:
Halfords Yuasa Racing has had 10 points deducted from its Teams’ and Manufacturers’ Championship scores having changed an engine above the number permitted