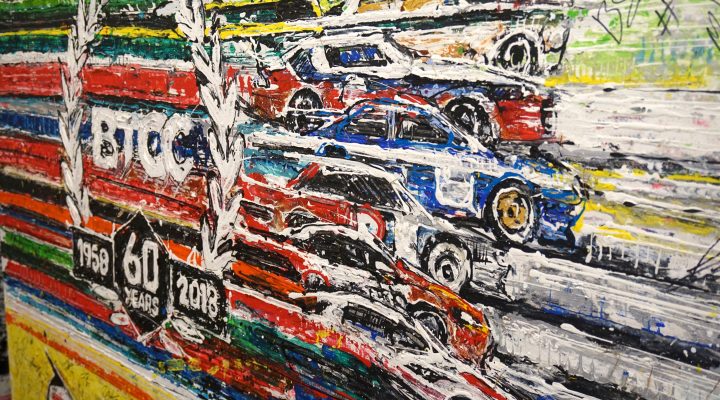 The artwork was created at the ‘Diamond Double’ race meeting at Snetterton in July and is signed by much of the current crop of BTCC drivers including Jason Plato, Matt Neal, Tom Ingram, Andrew Jordan and Ash Sutton. The auction will start on Thursday 27 September, to co-incide with Macmillan’s traditional ‘World’s Biggest Coffee Morning’ on Friday, the eve of the final round of BTCC at Brands Hatch. The original artwork will be on display at Popbangcolour’s trade stand.

Ian Cook, of Popbangcolour, has for the past 10 years combined his passion for cars and career as an artist, creating artwork by painting with radio-controlled cars, toy car wheels and Dunlop tyres instead of traditional paintbrushes. Ian has produced over 400 artworks including breaking a Guinness World Record whilst painting with a full-sized car. His artwork has also appeared across numerous television shows including Top Gear’s art special, Blue Peter and The One Show.

Macmillan is the corporate charity of Dunlop and aims to reach and improve the lives of everyone living with cancer and to inspire millions of others to do the same. Since Douglas Macmillan founded the charity in 1911, Macmillan has grown to be the UK’s leading source of cancer support, helping more and more people living with cancer.

The auction starts on Thursday 27 September and will close at 8pm on Monday 1 October.

For those not wishing to bid but would still like to donate to Macmillan, please visit https://www.macmillan.org.uk