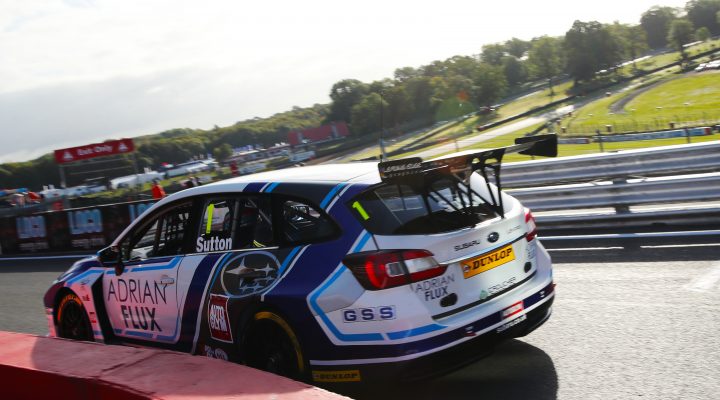 It has been a valiant title defence from Sutton, who only dropped out of overall contention at the penultimate event at Silverstone, but runners-up laurels are still very much up for grabs. The Subaru star has still won the most races of any driver this season – five victories so far – and he is keen to keep that honour.

“I can go out and enjoy it – straight away we’re on the pace,” said Sutton. “I’m here to win races whether there’s a championship at stake or not. Tom (Ingram) is going to be very fast this weekend and he’s the one that can take the most race wins away from me, so I’m out to stop that. The car feels good, except we were sat in the garage! We had a slight oil leak so we thought it best to garage the car just to be safe.”

BMW Pirtek Racing’s Andrew Jordan ran second in FP1, ahead of WIX Racing with Eurotech’s Jack Goff, both of whom have put up good championship challenges this season.

Fourth placed Tom Chilton is still in mathematical contention to win a maiden BTCC title and the Team Shredded Wheat Racing with Gallagher man was happy to have pipped his main rivals.

“I am really pleased with fourth place so far,” he said. “I know it’s only FP1 but I always think it’s quite a good guide. Colin Turkington is down in 15th and we’ve got a gust of wind to get ahead of Tom Ingram too. I love this place, it’s my home circuit and my favourite track in the UK. I’m excited about the weekend and we’ll be pushing throughout.”

All 31 cars will be back on track for Free Practice 2 at at 12:05, before the final Dunlop MSA British Touring Car Championship Qualifying session of the season commences at 15:20. Qualifying and the proceeding four races from the Renault UK Clio Cup, F4 British Championship, Michelin Ginetta GT4 Supercup and Ginetta Junior Championship – all with title battles on the line – will be streamed live and exclusively via www.itv.com/btcc.