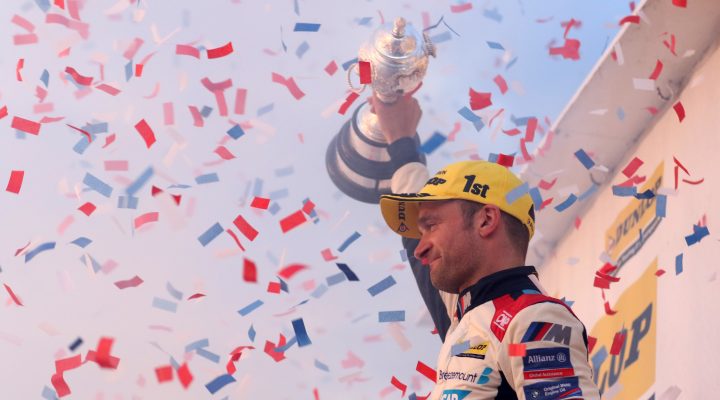 The 2018 Dunlop MSA British Touring Car Championship – the Diamond Jubilee year of the UK’s premier motorsport series – drew to a close at Brands Hatch today (30 September) with Team BMW’s Colin Turkington crowned champion for the third time in his career.

Turkington held a 34-point advantage going into the final weekend of the season, and he duly extended that gap by a further two in the opening contest around the legendary Kent circuit.

Nearest challenger, Tom Ingram, then needed to score at least a podium in the second bout to keep his championship charge alive, and the Speedworks Motorsport star did everything he could to achieve it.

Surging from 14th on the grid, Toyota man Ingram made pass after pass and was lying in fourth during the closing stages. He made a number of attempts to make one more all-important move, but BMW Pirtek Racing’s Andrew Jordan held on ahead of him – helping to secure stablemate Turkington’s BTCC title hat-trick, as well as Manufacturers’ and Teams’ glory for BMW.

Turkington’s stellar season was one of incredible consistency as he won just one race during the 30-race campaign – at Oulton Park in June – but a further ten podium finishes underlined his brilliance.

Ingram ended his impressive season on a high with yet more charging drives, which were a staple of his 2018 challenge. The 25-year-old was rewarded with a fantastic runners-up spot in the overall Drivers’ standings, as well as securing Independents’ titles for him and his Speedworks Motorsport squad.

The races themselves around the 2.43-mile Grand Prix circuit proved typically dramatic, with the best being saved until the last.

The opener went the way of Halfords Yuasa Racing’s Dan Cammish – a 17th different race winner of the season – as he headed home team-mate Matt Neal, whilst WIX Racing with Eurotech’s Brett Smith completed the podium.

Like London buses, the manufacturer-backed Honda boys did it again in race two as Cammish led Neal once more. It has been an up and down campaign for the Team Dynamics-run outfit, but a successful final day helped them to secure runners-up laurels in both the Manufacturers’ and Teams’ tables.

The final race was a BTCC classic as Ash Sutton triumphed by just 0.032s from Josh Cook.

An incredible battle between Power Maxed TAG Racing’s Cook and outgoing Champion Sutton had the huge crowd on its collective feet as the duo ran side-by-side and swapped positions on several occasions.

Cook looked to have held off his former team-mate and good friend going into the final corner, but Adrian Flux Subaru Racing’s Sutton had other ideas.

Sutton ran his Levorg around the outside of the Vauxhall Astra through Clearways and in an incredible drag race to the finish, the #1 car stole victory in the closest finish of the season.

DUO Motorsport with HMS Racing’s Rob Austin completed the final podium of the year – himself less than a second behind Sutton – as the popular Alfa Romeo driver took his second rostrum of 2018.

The Dunlop MSA British Touring Car Championship will return in 2019 with the season commencing on the Brands Hatch Indy Circuit in April. The series will will again comprise of 30 races across ten events, with the Brands Hatch GP circuit again playing host to the season finale.

Colin Turkington said: “The emotions are just so raw. I was driving around there preparing for a dogfight in race three thinking ‘how on earth I was going to get forward’. I wasn’t expecting the news on the radio that I’d won the championship. I’m so pleased for so many people. The first one, I really wanted it for me. It was my goal in 2009 and I wanted it more than anything.

“With BMW’s support coming on-board last year, it’s so special to win it for them. It’s an amazing achievement and for West Surrey Racing, too – they never give up. We’re always the last in the pits on Saturday evening – we just work, work, work. That’s the secret. We never had the fastest car this year; we just kept at it, scoring points. I’m so pleased for my family. We knew coming into the season that you’ve just got to score points. It’s very difficult to do as you can see from that race. I’ve had one win but ten podiums and they are as good as wins in this championship.

“This is the one that I wanted for my Mum, for Tipper (West Surrey Racing truck driver) and for Steve. There’s so many people that I wanted it for, I’m so pleased for them and for my mum.”

Tom Ingram said: “I gave it everything I had. The boys worked so hard for that race as they have done all season. We had to give it everything but well done to Colin (Turkington), he’s done the job again. He’s ever the professional. He scores the points and knows what he needs to do. I’d have loved to have beaten him – maybe next year. For everyone at home that have shown us so much support this year, I can’t thank them enough.

“We’ve had a stellar year and it’s fantastic to have won both Independents’ titles again. I’m going to have a little moment to myself but we know what we can work on and we’ll come back even stronger next year. We’ve not started yet!”

Tom Chilton said: “It’s been a fantastic year. Considering that we got off to a slow start, all the stars aligned. The team have been amazing; I just had to keeping kicking the gears and scoring points. I’m a bit frustrated that I didn’t manage to win the Independents’ championship, that’s the only downer from the season. But if I’m honest, third overall is epic.

“I’m feeling very happy here at Motorbase and in the car. I love my team-mates to pieces, I owe James and Sam one and if they ever need me when it comes down to the wire like it did today, I will be there for them both, 110%.”

Dan Cammish said: “What a great day, I’m really proud of the guys and the team. The fact Matt (Neal) was second shows how much potential we’ve had. To get my first win is just great – what a fantastic moment. There’s not a better place than Brands Hatch to do it, and in the sun too.

“The plan was to formation fly around the end of the race and I knew Matt would be a good wingman – it was good to have that. Matt’s a great team-mate, not only on the track but off it as well. He’s open with data and doesn’t keep anything from me. I think if I’m faster, he’s encouraged by that. Hopefully I dragged him around a little bit there too!”

Ash Sutton said: “I was happy to settle for second. That was the best race I’ve ever had and to do it with Josh (Cook) was mega. It was always the aim to go away with a win here. After race one, it was looking hard but we dug deep and I had to hunt Josh down.

“For the last god knows how many laps, I was just laughing to myself in the car. Luck wasn’t on our side this year and we had a slow start. We’ll come back stronger next year.”

Mickey Butler, Manager, UK and One Brand Motorsport Events, said: “It’s been a fantastic end to a superb season. Brands Hatch GP is one of those circuits that is kind on tyres and I knew the Option tyre would be the better one which it proved to be, it does give you the edge and the drivers love it. I think looking at every race this season, whether it’s been the Hard or Soft-Option tyres, it really mixes the races up. It makes drivers and teams really think about the different strategies they’ve got to bring in to it. Overall I’m very pleased, but wait for the surprises in 2019!”

Dan Cammish (#27 Halfords Yuasa Racing) was handed a 30-second time penalty having been adjudged to have committed a false start in Round 28 of the 2018 Dunlop MSA British Touring Car Championship at Brands Hatch. However, stewards upheld Halfords Yuasa Racing’s appeal and therefore, the result of Round 28 remained unchanged.