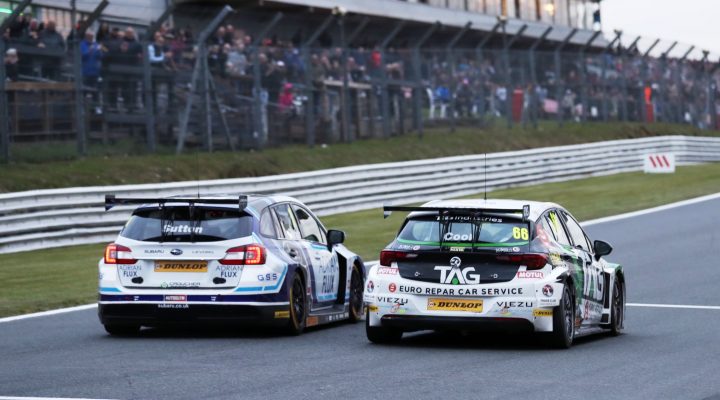 Ingram’s fight-backs became something of a trademark this season and, sure enough, the award that aims to recognise and reward drivers’ battles with adversity, went his way.

The season finale at Brands Hatch in the legendary Grand Prix circuit went down to the wire with #ForeverForward honours, the Independents’ Trophy, and Manufacturers’ and Teams’ titles all decided in Kent.

The reigning champ was aiming to go out on a high and it was Sutton who secured the weekend #ForeverForward. He battled back in race two having failed to finish the opening round – a stunning performance seeing him fly from 30th on the grid to eighth earning him 22 points, the highest in a single race over the weekend.

Starting third for the finale, Sutton again showed his class with a staggering, race-long battle for the top step with Josh Cook. The pair ran side-by-side for what seemed like an age before the Subaru man went around the outside out of the final turn and pinched victory by just 0.032 seconds over the line. BTCC at its best.

That put Sutton on 24 points in total to take the weekend honours for the third time in succession, and his move for the lead was understandably voted as the fans favourite overtake in Dunlop’s social media poll.

Ingram extended his FF advantage with a five-place gain in race one, as he chased Colin Turkington for the coveted BTCC crown. His bid for the overall title was over by race two, though, despite a spirited charge through the field that earned him ten spots, ensuring his #ForeverForward lead was insurmountable. He added a further two-place gain in race three to put him on 173 points to Sutton’s 150.

Chris Smiley was another notable improver, moving up 20 places across the weekend, with a solid drive in race two contributing 16 points to his tally.

Other fans’ favourite moves across the weekend were double race-winner Dan Cammish’s manoeuvre on Brett Smith in race one. Andrew Jordan wowed the fans with his lightning start in race two, up into third from eighth, to secure the vote in Round 29.