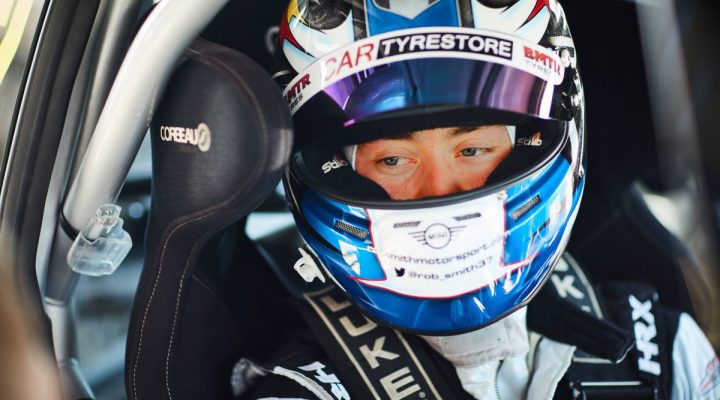 Smith, from Telford in Shropshire, is no stranger to the Excelr8 ranks having competed with the squad for the past four years in the MINI CHALLENGE as part of the official MINI UK VIP Customer Team, where the 26-year-old has been a consistent front-runner.

Now, as the Norfolk-based outfit makes its step-up to the pinnacle of British motorsport, having purchased a pair of MG6 cars and the required TOCA BTCC Licences from AMD Tuning, Smith too climbs the ladder for his eagerly awaited maiden season in the BTCC.

The focus for Smith is now on bringing additional partners on-board to join his existing portfolio which will be revealed at the annual Season Launch next spring.

“It’s an absolute dream come true to be stepping-up to the British Touring Car Championship for 2019, and especially to be doing it with Excelr8 Motorsport,” said Smith. “As soon as I joined the team in 2014 it was clear that we both saw our future in the BTCC, so it’s fantastic to finally make it a reality.

“We’ve been working hard behind the scenes all year, and it’s fantastic to be in a position to confirm we’ll be on the grid at such an early stage. We’re in the process of finalising a couple of deals, and still have a number of sponsorship packages available, so we should have an exciting range of partners to reveal at the Season Launch.”

“I have no doubt it will be a steep learning curve for both myself and the team, but continuity is key so hopefully by extending our relationship we will be able to add to the success we’ve already achieved. The MG6 is a proven package and one of the most successful cars of the NGTC era, so we have an excellent platform to build from and I know the team has some exciting plans for the future.”

After joining Excelr8 in the MINI CHALLENGE part-way through the 2014 season following a switch from the Renault UK Clio Cup, Smith took his first victory at Silverstone in only his third appearance in the category and has been a title contender in each of the following seasons, claiming a further six wins and 18 podiums since the introduction of the JCW class.

Speaking on the BTCC deal, Excelr8 Team Manager Oliver Shepherd said: “Rob has been with us for a number of years now so we’re well aware of his ability and the effort he puts in to be successful, so we were very keen for him to make the step up with us. Working with a driver we know means we have one less variable to think about while we get to grips with the demands of the BTCC.

“He was involved in the development of the MINI CHALLENGE JCW and our endurance car, so that experience should help us get an understanding of the MG6 over the winter. Rob knows exactly what he needs from the car and if we can deliver that then the results are sure to follow. He’s also very strong commercially, so we can be sure that our partners are going to be well represented both on and off-track.”