The TOCA Night of Champions 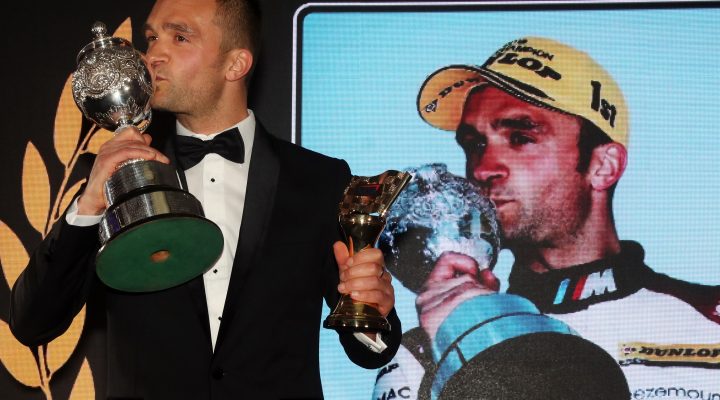 The 60th anniversary, 2018 British Touring Car Championship was rounded out in fine style at the annual TOCA Night of Champions this past Saturday (24 November) – with Kwik Fit unveiled as new title sponsors on an evening of celebrations.

ITV Sport anchorman Steve Rider hosted proceedings with Louise Goodman on hand to interview the stars of the TOCA package as they collected their silverware.

The BTCC proceedings were kicked off with the presentation of the largest trophy of the night – the coveted Jack Sears Trophy – as well as a Stilo ST5 carbon fibre crash helmet courtesy of nickygrist.com to Halfords Yuasa Racing rookie Dan Cammish.

“It’s great to win,” said Cammish. “It’s not the only trophy I hope to win in the BTCC but it’s fantastic. It’s been a great season. It was my first in a front-wheel drive car and the engine’s in the other end of the car compared to what I’d been used to. That was a lot to adjust to but I think we were quick from the outset.”

Speedworks Motorsport and Tom Ingram were busy on the night, taking home both the Independent Teams’ and Independent Drivers’ gongs respectively for the second consecutive year.

“It’s really difficult to put into words how much it means – it truly means the world to all of us,” said Team Principal Christian Dick. “We were disappointed not to come away with the big one but I must pass on a massive thanks to all of the team. Without them it wouldn’t be possible.

“Every season we’ve been involved we’ve crept forward but most of it has gone under the radar until we’ve got to the very sharp end. We’ve made huge steps this year and have got more planned for next year again. I couldn’t be more excited to get into work and get going at the moment.”

“We can look back at this season with real pride,” added Ingram. “We’ve got really good memories and it’s been such an amazing team spirit. That’s what pulled us through. For the work that everybody’s put in it’s the least we’ve deserved.

“We learn so much with each year that passes. I’ve been with the team since 2014 and we get better year-on-year, we move on and we grow. From a driver’s point of view you learn that it’s so tough in the BTCC you can’t afford not to score and not to be on the podium and build that momentum. That’s what I’ve learned most.”

Ingram made his way back on stage to collect Dunlop’s #ForeverForward honours, having also topped the tally for most positions gained last season.

“The BTCC gets tougher every year,” said Bennetts. “The competition is getting tougher but it’s a team effort and we have an advantage there with running three, or this year four, very good drivers. We can compare the data between drivers to improve. I’ve a difficult task sometimes keeping them all under control but I must say the team effort, all 27 of us, have been exceptional.

“When we started WSR in Formula 3 back in the day, there were three of us and we’ve come a long way. It isn’t just me. There are a lot of guys and girls doing fantastic work. It makes it easy for me. We love a challenge – 28 cars within 0.8 seconds at Silverstone is certainly that, and it makes the BTCC a fantastic championship to win.”

BMW and WSR added another title to their haul this year via Colin Turkington, and BMW Group UK and Ireland Managing Director Graeme Grieve aired his gratitude.

“It means the world to us, to our colleagues in Munich and most importantly our customers. Motorsport is at the heart of our brand and there were a lot of people supporting the team and Colin heading into Silverstone and Brands Hatch hanging on in there with us.

“We’ve had four drivers in three cars but with Andy (Jordan) and Rob (Collard) both taking wins, and the former fifth in the championship despite the worst of luck throughout the season. We also had Ricky (Collard) taking a maiden podium. It’s been a great year.”

“They’re all difficult but this one meant more to me than the others,” added Turkington. “It’s really special to win it three times. This is one of the biggest prizes in global touring car racing, so to be on here three times is an immense pleasure and it makes me very proud.

“When the engineer comes on the radio and tells you that you’ve won, all of those feelings that you’ve been bottling up throughout the year come out. It’s relief that all of the discipline that all the teamwork and the hard work that the team put in has paid off.

“The podium, champagne, fireworks and your phone’s on fire – everyone wants a piece of you. You want more of that and we’re so lucky to be doing this. For me, driving for BMW and winning this championship and doing it for them was a joy.

“I’m not sure there were many single moments. Never through this year did I think we were far and away quickest, we just kept working hard and kept grafting away and scoring points. I got to the end of the season having won one race but to come out with this prize, you just realise how tough it is.

“I just wanted to say to T0m (Ingram) and Speedworks that they put up a hell of a fight and pushed us all the way and that’s what you want as a driver – to push yourself and be the best that you can be.

“With competition like that, you have to go to the next level and we all know Tom will be a champion one day, I’m just glad it wasn’t this year!

Award-winning BTCC Engineer of the Year Kevin Berry, Turkington’s engineer, was there all the way and has been for some time alongside the Northern Irishman, who was keen to pay tribute.

“He’s very hard to please,” said Turkington. “He’s been the man in my corner for six years now and he’s never happy. As soon as I get out of the car he calls me to the engineer’s office and says ‘Andy (Jordan) is quicker here, Rob (Collard) is quicker there and Ricky’s found a bit’, so we’re always seeking the tiny margins and that’s where Kevin comes in.

“We’re probably the last two out of the circuit. I don’t think I’m good for his health but he’s given me two championships… We clicked from day one and he quickly understood what I needed from the car to go fast.

“We make each other’s job easy and we make a good team. I look forward to working with him in the future and hopefully more success.”