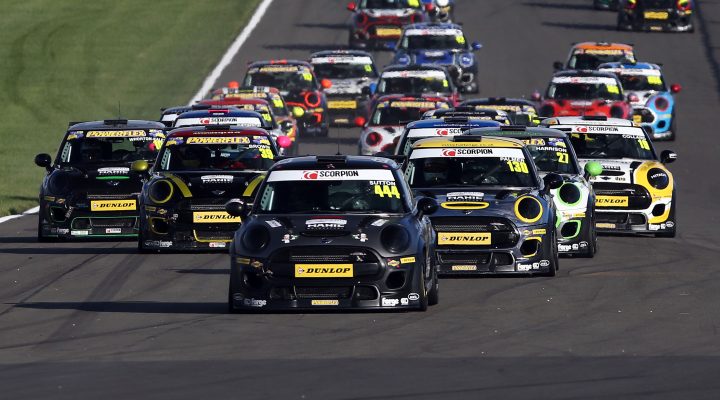 The MINI CHALLENGE will form an integral part of Britain’s biggest race weekends when it joins the Kwik Fit British Touring Car Championship support bill full-time from the 2020 season onward, further cementing the CHALLENGE’s status as one of the county’s leading tin-top contests.

Negotiations for the MINI CHALLENGE to form part of the TOCA package reached fruition with a multi-year deal to take over the slot vacated by the Renault UK Clio Cup.

The top-flight CHALLENGE JCW Championship, which caters for the latest version of MINI’s 265bhp hot hatchback running on Dunlop slick racing tyres, is planned to feature at eight of the planned 10 BTCC weekends. The Cooper CHALLENGE – for the naturally aspirated 1.6-litre cars – will also get a chance to shine by running on the remaining two fixtures. The exact split of dates has yet to be finalised.

The CHALLENGE JCW category has been a runaway success in recent years when it has formed part of the undercard for the British GT Championship. The two-litre turbocharged F56 cars have attracted capacity grids and provided ultra-competitive racing.

The Cooper CHALLENGE has been the foundation of the championship since its inception in 2002, offering close and affordable racing for experienced drivers and novices alike.

MINI CHALLENGE Promoter Antony Williams said: “The deal to join the TOCA package represents one of, if not the biggest moment in the history of the MINI CHALLENGE and it’s certainly something we’ve been working very hard towards over the last few seasons.

“The JCW is now a proven, purpose-built race car and driver feedback has suggested that it is the closest thing out there to the thrill of driving a full NGTC touring car, making the CHALLENGE an ideal feeder category toward the BTCC. During recent seasons we’ve had many BTCC teams come to join us, and we’re proud to boast a string of alumni drivers who have gone on to race successfully in the BTCC.

“Running in support of the UK’s biggest circuit racing championship will only strengthen that link further and we have to also thank our superb tyre partner Dunlop for its support in working toward this deal. We’ve enjoyed very healthy grids in recent seasons, and we fully expect that to continue as part of the TOCA package.

“The deal is also brilliant news for the Cooper CHALLENGE. Electing to run the JCWs at eight of the 10 rounds helps keep budgets under control, and also gives us the chance to elevate the Coopers onto the main stage and show the strength of the MINI CHALLENGE at all its levels.”

BTCC Series Director & Administrator, Alan Gow, added: “We’ve kept an eye on the development of the MINI CHALLENGE over the last few years and it’s clear that it’s a very popular and competitive championship.

“At TOCA we are keen to showcase not just the British Touring Car Championship, but also the cream of national racing categories to our audiences both at the circuits and on TV. Recent years have certainly shown that the MINI CHALLENGE is an ideal feeder category for drivers aspiring toward a career in the BTCC and I’m sure the championship will be an excellent fit within our 2020 weekends and beyond.”