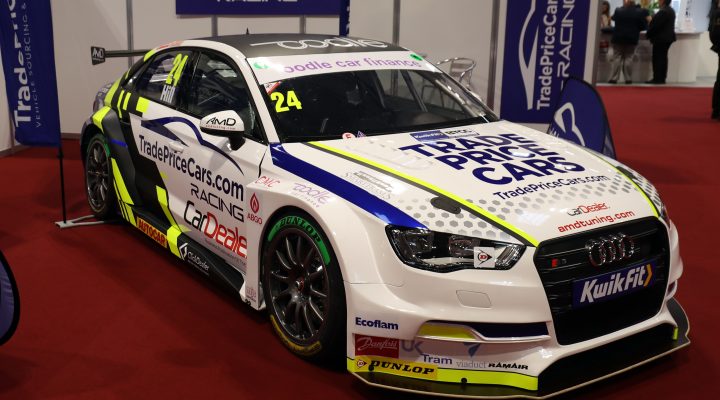 Trade Price Cars Racing unveiled a fresh new look this morning at Autosport International, with the covers coming off Jake Hill’s Audi S3 Saloon, which has undergone a complete rebuild over the off-season.

The award-winning Essex-based car dealer agreed terms in October to purchase the two Audi S3s that were previously entered by AmD, along with the TOCA BTCC Licences (TBLs) required to compete in the series, with AmD continuing to run the cars as part of a two-year deal.

With the car already in show-ready state, the outfit are ahead of schedule with their 2019 preparations.

“Autosport International is always greeted with bundles of anticipation at the beginning of the year, said Team Owner Dan Kirby. “We are thrilled that our car is ready to go, and this just highlights how focussed we are on getting the most out of our package prior to the season kicking off in a couple of months’.

“Our technical partners at AmD Tuning have done us proud. The preparation and research that is being carried out, especially with the engineers being able to already work with Jake (Hill) is incredibly exciting.”

“It’s such a great feeling coming here having confirmed my deal well before Christmas,” added Hill. “For the first time in my career, I’m heading to Autosport International along with the car I will be racing!

“We’ve got media duties and meetings with our partners and the team, but hopefully I will also get a chance to say hello to some of the fans that always make the show so much fun.

“It’s such an exciting opportunity to race a car that I feel has huge untapped potential, with a team that are as determined and focused as I am on success. My relationship with my engineer and everyone in the team is already incredibly strong, and I feel happier and more focussed than ever before.

“So here we are – car built, team ready, driver ready – bring on Brands in April!”

Team Principal Andy Wilmot will join Kirby, Hill and AmD Tuning’s Shaun Hollamby at the show, and is equally as buoyant the Essex team’s progress.

“Everything is completely on schedule,” said Wilmot. “Signing Jake sends out a very important message that we are serious about success. I’ve known him for a long time and know what a talent he is, Dan has worked with him as a sponsor for the past couple of seasons, and Shaun has supported and run Jake since his Ginetta Junior days.

“We have several very interesting conversations ongoing with drivers who we are evaluating the possibility of joining the team, and some amazing partners who we are finalising our plans with.

“Having the car on display is fantastic in our ‘interim’ livery. We will reveal the final look and all of our partners at BTCC Season Launch in March but we’re very pleased with how the car looks so far.

The Trade Price Cars Racing’s Audi S3 car can be found in Hall 3, with a fans’ competition running over the duration of the event, and Hill on hand throughout the show.