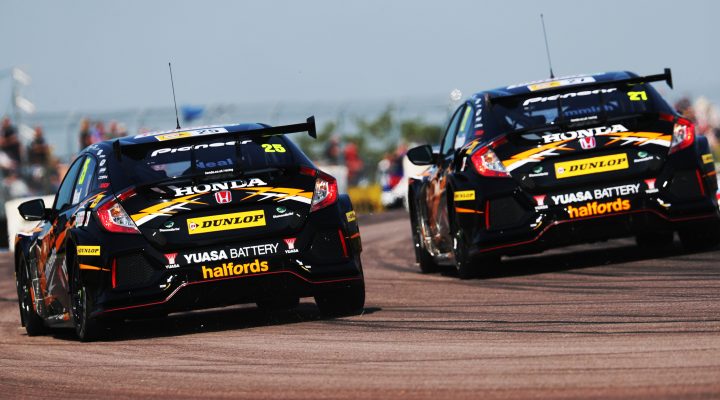 The outfit notched multiple race wins last year with the then-new current-generation Type R. Neal notably sealed the honours in the coveted Diamond Double race at Snetterton and rookie Cammish notched a couple of victories of his own, ending his first BTCC campaign on a real high.

“It was a good rookie season,” started Cammish. “It was up and down and mistakes were made but ultimately they were always going to happen as a rookie. It was more about learning and absorbing things as a driver with the transition from rear-wheel drive to front-wheel drive.

“We had a new car and I had a new team mate, too, so there was a lot to take on there even before you get onto racing the thing with 31 other drivers.

“We had some good days and some bad ones and I think some of those bad ones could have been a little better had I done things differently, and I kick myself for that. I got the Jack Sears Trophy and a couple of poles and wins. I could have had a couple more podiums maybe had things gone differently but that’s racing.”

Cammish harbours plenty of confidence in his ability to kick on in his second BTCC campaign after a strong debut year, with data and experience now in the bag and a comprehensive testing programme in the works.

“The expectation I have of myself is higher than anything anyone else has of me. I know what I’ve achieved so far in the sport. In every championship I’ve been in, I’ve delivered.

“It’s an incredibly tough championship with a massive learning curve but come the middle and the end of the season we had some great results, with a couple of wins. I feel confident going into 2019. I’ve got that year under my belt now and I’m no longer a GT driver pretending to be a BTCC driver. I fully intend to be in contention going into the final weekend of the season.

“Matt (Neal) had to do a lot of the development side of things himself this year in terms of picking a direction in which to go with the new car. I had absolutely no data bank to rely upon, going to a lot of circuits with no experience to rely on.

“I’d turn up as a rear-wheel drive expert and I’d have to become a front-wheel drive expert in about 45 minutes, which is incredibly difficult against these guys. I have that data now. I know how the car should feel in qualifying trim and in race trim and I know how to get the best out of it. I think I’ll be at a whole different level in 2019.

“We’ve got a test programme coming up, starting in early March to run until the start of the season. We’re UK-based for this year and looking to test where we struggled last year to get that consistency, which is key.

“It’s about understanding what led to those bad days last year. If we can understand that, then we’ll kick up another notch on the whole.”

At the other end of the BTCC experience spectrum is Cammish’s team-mate, Honda mainstay Matt Neal. He’s as up-for-it as ever ahead of the new season, and feels Cammish, as well as the FK8 will really come into their own in 2019.

“I think you need to stay hungry,” said Neal. “I was pushing Alan Gow for a gold watch after 25 years and he ignored me, so now I’m going for a pension!

“It was a challenging year last year with the new car, and a new team-mate. There was a lot to learn and a lot to process but it didn’t always go well. We had some great results and some nice wins and there was fantastic speed in the car at certain events, but not at all.

“We’ve now got a year’s data on the car and inside Dan’s head. We get on well and work well so we’re looking to exploit that added information this year.

“There was maybe a bit of a shock to Dan at the start of the season as he was a multiple champion in Porsche Carrera Cup GB – he was on another level to anybody else. He came to our team, with myself at 51, and suddenly I could stay with him at certain tracks and even get ahead of him. It was a surprise.

“He’s a serial winner and that was a bit of a culture shock, as was the difference in racing in general in the BTCC. That said, you can’t teach someone speed and he’s got that in abundance. What you can teach people is how to stay out of trouble, look after the car and learn the people and personalities in the championship – those you can trust and those you can’t.

“TOCA has reduced the top level of ballast, which was correct. It was too much given how close the championship has become. Where Team Dynamics succeed is when the regulations change.

“I like to think we get a handle of them quicker than other people have in the past. When it gets to a level playing field is when it gets tough. With the changes, the ballast and multiple different tyres – I think it’s great.

“You’ve got to think about it but it might give us a little bit of an edge over some of the opposition at some of the events. It’s great to see change and I think we should do more.

“You tick every box then hope for lady luck to shine on you a little bit. I’m always a great believer in fate and luck. You can do the best job ever but if the dice aren’t rolling for you, that’s that.

“We’ll be dotting all the Is and crossing the Ts in testing and we’ll focus on where we were weak last year in testing.”