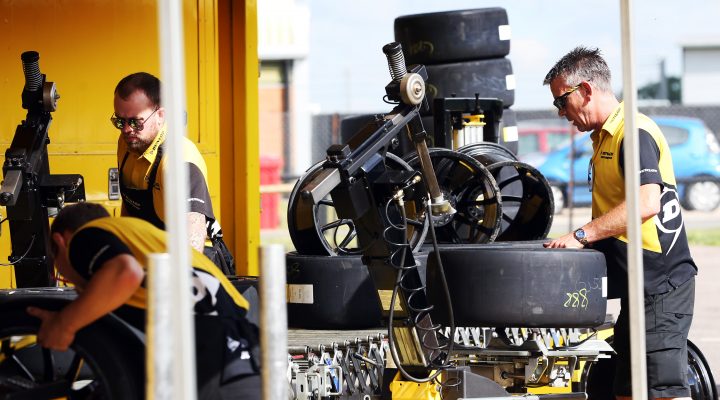 Dunlop’s UK and One Brand Motorsport Event Manager, Mickey Butler, was tasked with mixing up the formula for the 2019 Kwik Fit British Touring Car Championship, and he has duly delivered on multiple counts, each conceivably throwing the proverbial spanner in the works for tacticians up-and-down the pit-lane.

This year, at Snetterton, drivers will have to use each of the three option tyres on a triple-header race day for the first time and at Knockhill the Option Soft tyre becomes the main choice. Additionally, 2019 will see the introduction of an all-new Dunlop Sport BluResponse Wet, featuring a new method of compound manufacturing. The moulded groove technique now employed allows for more consistent compound stability throughout races and up to a second-a-lap improvement in pace.

“For 2019, I was asked to make changes for the coming season by TOCA and for Snetterton, the teams and drivers have got to use all three option tyres,” said Butler.

“That meant the introduction of the green side-walled ‘soft’ option alongside the silver side-walled ‘hard’ option and of course the yellow prime tyre.

“When they use those compounds will be entirely up to the teams and drivers that weekend, which will add an extra tactical element. It’ll also make for some busy reporters and journalists, running up and down the pit-lane when these cars start their sessions – it’ll keep people guessing.

“Every now and then you’ve got to add something new and Snetterton will be a big change-up for teams to get their heads around.

“There are a lot of factors such as track temperature, potential interference of weather and circuit evolution, that’ll determine when teams think it most optimal to run each tyre. It’s a real curve ball.

“The next change is that we’ll be running the soft compound SportMaxx tyre as the ‘Standard’ tyre for the weekend with the option tyre becoming the medium tyre. It will be the first time the soft tyre has been used in a qualifying session. Something new again for drivers and teams to think about.

“The new wet tyre too, is something we’re pleased with and we think drivers will be receptive to that change. There’s an increase of around 30 percent in terms of lateral grip and we’re projecting a second-a-lap decrease in lap-time as a result.”

Dunlop’s long term as series title sponsor may have drawn to a close, for now, but Butler reiterated the brand’s ongoing commitment and spoke of his excitement at the partnership between Kwik Fit and the BTCC to come.

“We’ve been doing this a long time,” said Butler. “Our success together goes back to that close relationship with the championship promoter and the teams.

“Tyres can then be designed to suit the specification and requirements of those parties. Running three different slick compounds with a requisite difference in delta times between each is always difficult. It’s a hard thing to achieve but I think we’re there and it’s really added to the mix on a race weekend.

“For brand awareness, it’s incredible. More than that, though, it’s a test bed and a source of research and development for us. Information we’ve learned in constructing the new BTCC wet tyre is going straight back into the road tyre. It isn’t just a one way street. We’re synonymous with the championship and we consistently exceed our own expectations in terms of the return we see as a result of our involvement.

“For me personally, I’m a fan, first and foremost. I’ve been involved so long and it’s a privilege. The biggest thing I love to see is the development of young drivers coming through and last year was the pinnacle of that in recent times. Those guys have been on a par with the older stagers.

“It was a real level playing field last year. I remember catching someone in the paddock after that first race weekend at Brands Hatch and saying ‘how are we going to top that?’ but every weekend thereafter there was something to talk about, it’s incredible. There’s no predicting what’s going to happen.

“Kwik Fit are grabbing the bull by the horns and we’re a major supplier to them, so it’s a win-win for everybody. We’re still heavily involved as a technical partner for the championship. It’s a great mix of partnerships.

“It’s great to see the enthusiasm of the Kwik Fit guys and they’re one big family. Andy Lane, the company’s Marketing Director has spoken about how much of a lift he’s seen across their network of stores with so much interest from staff wanting to get involved. I can’t wait to see what’s to come, and nor can they.”