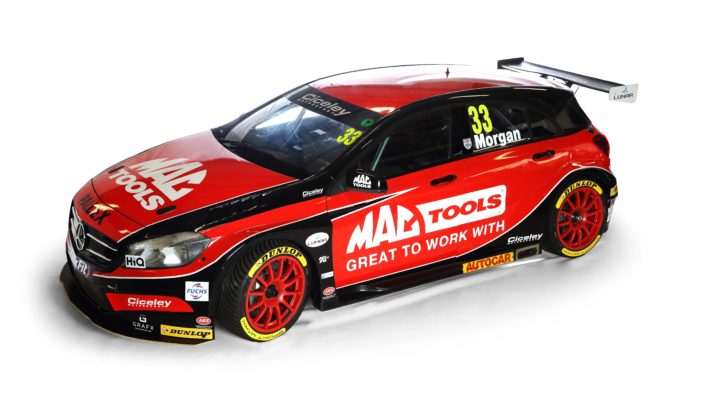 Adam Morgan is ready for an all-out assault on the 2019 Kwik Fit British Touring Car Championship with Ciceley Motorsport, as the outfit reaches the climax of an extensive development programme.

Morgan will be joined in the Ciceley stable by Dan Rowbottom in the sister Mercedes-Benz A-Class this season. The pair are out at Circuit Calafat in Spain this week trialing some more radical set-up philosophies as the outfit seek its venerable Mercedes’ peak performance.

“We have been through another round of weight saving with the car,” said Morgan. “By doing that, it means we can put ballast in parts of the chassis which will help the handling.

“We’ve developed the chassis, too. I don’t think that the age of the car is an issue. Look at the Toyota Avensis that Speedworks ran last year. That’s not a fresh car and it was one of the fastest out there in 2018.

“We have worked through a comprehensive testing schedule and we have done some detailed simulation work to try and understand the set-ups more. We will try some radical things in testing and I’m sure we’ll unlock some more pace from the car.”

Morgan returns for an eighth season in Britain’s top-flight motorsport series and he’s thrilled to be back, with the full support of title sponsor Mac Tools.

“I am delighted to be able to contest in the BTCC again,” added Morgan. “It’s fantastic to have Mac Tools supporting me for another full season as title sponsor, we have enjoyed an eight-year relationship with the company and it just goes from strength-to-strength.

“We couldn’t sustain our BTCC campaign without the support of our fantastic sponsors Fuchs Lubricants, Lunar Caravans, Ciceley Commercial Vehicles, Pallex, K&N Filters, Water logic and grafx, either. There are many other supporters of the team who pledge both time and money and it’s this core group of people that helps keep us going.

The Lancashire driver welcomes a friend into the fold this year in the Cataclean side of the garage in Dan Rowbottom.

“It’s great to have Rowbo in the team,” he said. “We get on really well and I can’t wait to start working with him.

“We enjoyed some real scraps together in karting and although he says he always beat me, I don’t remember it like that!

“Dan has been up to the workshop a lot over the winter and is already getting on really well with his engineering team, he has fitted in straight away.”

Norman Burgess, Ciceley Motorsport Commercial Director added: “It’s a dream job for me at Ciceley Motorsport all our sponsors have remained yet again, the most important ingredient for any team is support from sponsors we simply couldn’t go racing without them.

“The team has been absolutely flat out on full gas as usual throughout the winter improving the entire package and I think the car is now at its peak, we have a realistic chance of securing our best ever season.

“Dan is great to work with both at and away both at and away from the track. Adam and I have tried to lure him into the team for the last couple of seasons and working together we have managed to get him on board this year with his sponsor Cataclean.

“There is a good feeling throughout our entire squad.”