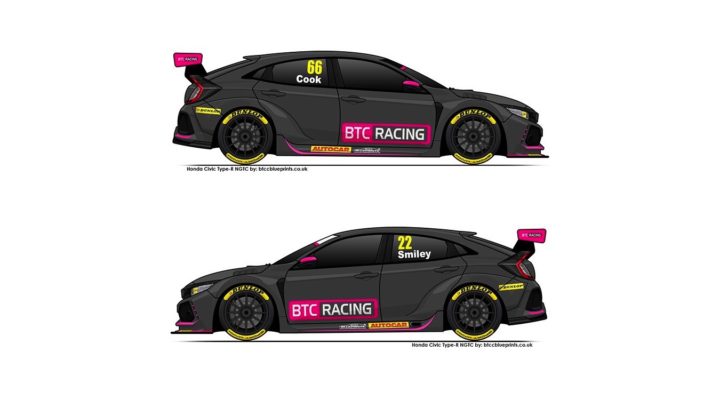 The team’s 2018 move to Honda machinery in the shape of the previous generation FK2 yielded breakthrough victories and a number of podium finishes. Team Principals Bert Taylor and Steve Dudman of the Brackley-based squad have signalled their intent with the build of two new cars to spearhead their 2019 campaign.

“Team Dynamics Motorsport is delighted to be supporting BTC Racing in the 2019 BTCC,” said Rodgers. “The team has shown itself to be a force to be reckoned with in the championship and with its new cars for the season we hope to see great things. We look forward to working with BTC Racing this year.”

A host of changes have taken place behind the scenes at BTC Racing this winter, and the acquisition of the new Hondas becomes the latest boon as the team looks to establish itself as a podium and race-winning regular in Britain’s top tier.

Team Principals Steve Dudman and Bert Taylor expressed their confidence ahead of the 2019 campaign, earmarking the extended partnership with TDM as a major contributor to that assuredness.

“The team at Team Dynamics Motorsport are consummate professionals in everything they do,” said Dudman. “They handle the fine line between us as a customer and being their competitor with complete balance, fairness and transparency and we look forward to reaping the rewards in 2019 for both teams in equal measure.”

“Our relationship with TDM just moved up a gear,” added Taylor. “By allowing us into the stable, we’ve been granted privileged access to more than 20 years of hard work, data and championship-winning experience.

“It is difficult to describe just how committed Barry (Plowman, Technical Director) and the guys at TDM are until you see what they build. It’s a real masterclass in engineering for the Honda brand”.

With the cars currently undergoing preparation for drivers Chris Smiley and Josh Cook, BTC Racing has also secured the services of Neil Brown Engineering – meaning the team will use the same engines as in the works Hondas in 2019.

The Honda Civic Type R is recognised as one of the most successful cars of the NGTC era and Neil Brown Engineering has powered many outfits up and down the grid to pole positions, race wins and BTCC titles over the years.

Team Principal Bert Taylor believes the Honda engine is the way to go, alongside its newly-acquired FK8s.

“After two years with Swindon Engineering, we’re sad to leave them,” said Taylor. “Especially after all the hard work and support they have provided us with the TOCA engines used in both our Chevrolet Cruzes and FK2-gen Honda Civic Type Rs.

“I’ve been a NBE customer previously, so for me and the team it was like going home. Fiona and Neil (Brown) made such a good first impression. It wasn’t a difficult decision in the end to make the jump and be sure that the new cars would have the Honda powerplant in their engine bays.

“We feel we’ve got the best partners providing what is recognised as one of the best engines in the championship. This yields the best opportunity yet for us to challenge right at the sharp end for race wins and podium finishes.

“Having the Honda engine makes the car and team feel we have a complete package,” added Dudman. “We look forward to working with all of the team at NBE in what we’re sure will be a great year in the BTCC.”