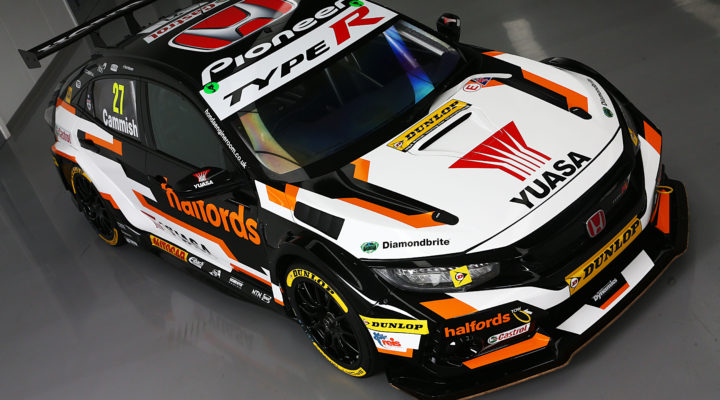 Revealed in its striking new livery, the 2019 car is set to build on the current generation Type R’s successful debut last year, with drivers Matt Neal and Dan Cammish each taking a pair of victories. Honda finished runner-up in the Manufacturers’ championship while Halfords Yuasa Racing took second in the Teams’ running.

In the five-month ‘off season’ Team Dynamics, which runs the Halfords Yuasa Racing team, has been working hard to further develop the Civic Type R ready to face even more fierce opposition in the 2019 BTCC season.

Dave Hodgetts, Honda UK Managing Director, said: “If the Civic Type R BTCC car goes as good as it looks, then we will be confident of strong results this season. After intensive winter development by Team Dynamics, and with our highly talented pairing of Matt Neal and Dan Cammish driving the cars, we are eagerly counting the days to the first race at Brands Hatch on 7th April.”

“The whole team have worked really hard over the winter to improve on the package that we had in 2018 and this is just exemplified by the new livery,” added James Rodgers, Team Manager. “It differentiates us from the crowd and combined with our technical changes should make for a competitive package in 2019.”

“The new livery on the FK8 looks awesome, having had a hand in the design process I’m really happy with the final results,” said Matt Neal, driver and Team Dynamics Director.

“Wow! When I saw the livery I thought that will look awesome on track and on the TV, a real stand-out design. I can’t wait to get out testing in the car tomorrow at Donington,” echoed Dan Cammish.