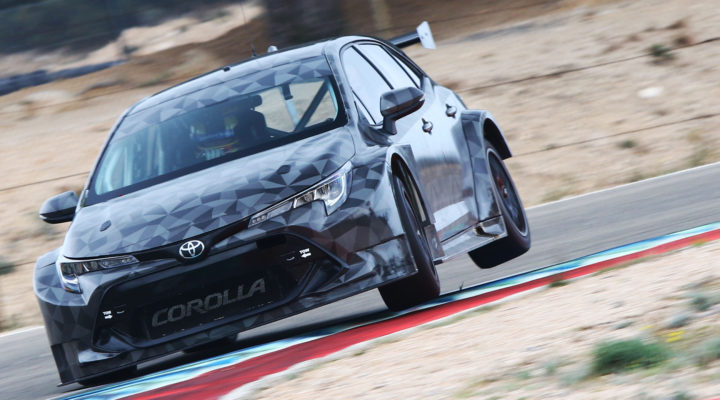 Having rebranded over the winter after gaining manufacturer backing from Toyota GB, the Northwich, Cheshire-based outfit conducted an initial shakedown at its home track of Oulton Park before heading overseas to Catalunya’s Circuit Calafat for three days of extended running.

From the moment it left the pit-lane, the Corolla – an iconic nameplate returning to the BTCC for the first time in three decades – turned heads, as much for its eye-catching looks as for its impressive out-of-the-box performance. Making the most of the warm weather, 25-year-old Ingram – widely regarded as one of the hottest properties on the grid – put plenty of laps on the board under the Spanish sun and professed himself delighted with early progress.

Further testing is planned at Brands Hatch and Donington Park – scene of the season’s opening two race weekends next month. Whilst there remains much work to do in order to hit the ground running come the Kent curtain-raiser on 6/7 April, it has unquestionably been a positive start.

“We were overwhelmed by the response on social media and all the enthusiastic messages we received when the first images of the car filtered out, and seeing the Corolla take to the track for the first time was an emotional moment and a source of immense pride for everyone involved.

“It’s a very different car to the Avensis that we ran before in terms of its wheelbase, aerodynamic silhouette, centre of gravity and weight distribution. That means there has been a lot to learn and we have had to adopt a full belt-and-braces approach, but we now have a solid understanding of what makes the Corolla tick.

“I’m mindful of not wanting to build up any expectations, but everything went according to plan in Spain with no major dramas. We enjoyed good weather and put a lot of miles on the car, which has given us plenty of useful data to pore over back at base. Whilst there is clearly still room to improve, we seem to be in pretty good shape and can certainly be pleased with progress so far.

“It’s been a monumental effort by the whole team to get to this stage – everybody has done an absolutely phenomenal job – and I think we can be quietly optimistic following our first proper run with the Corolla. That said, with less than four weeks to the start of the season, there’s no time to ease off the gas and we will keep on pushing flat-out between now and Brands Hatch.”

“The reaction to the car’s roll-out has been amazing. I know we’re obviously biased, but we think the new Corolla looks out-of-this-world and it seems a lot of people agree. We’ve even had rival team bosses and drivers telling us how impressed they are, which is a real vote of confidence and testament to the incredible job done by Toyota GB and the Speedworks crew.

“It was a really productive few days out in Spain; we ticked off everything on our checklist and have come home with a lot of questions answered, and most importantly, the car felt absolutely superb. We didn’t really expect to be quick straight off the bat, but by the end of the first day at Calafat, we were already there-or-thereabouts. What was particularly encouraging was how well the Corolla responds to minor set-up changes compared to the Avensis, and its stability and braking performance are extraordinary.

“I’m feeling so excited – really buzzing. It’s so cool to be going into the season with a new car, and we are working tirelessly to make sure we are in a strong position by the first round. To get the benefit of so much testing is a major bonus, and hopefully we can go to Brands Hatch and fight immediately at the front.”