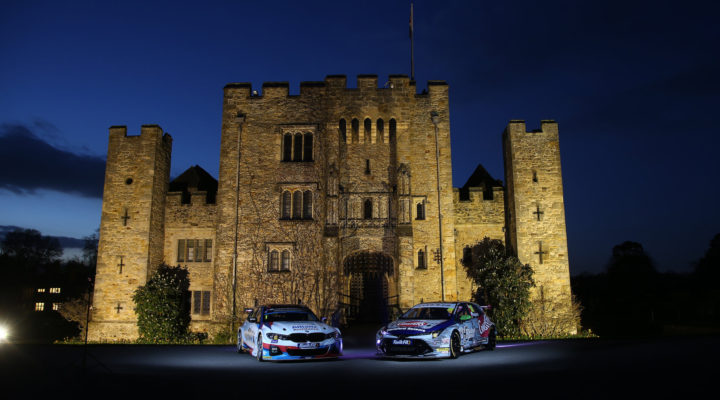 The Kwik Fit British Touring Car Championship kicked off its 2019 season in style today (26 March) with a special evening event at the historic Hever Castle in Kent, where drivers, teams and sponsors were joined by some of the UK’s key media outlets.

Series Organiser, TOCA, confirmed a high-class capacity 30-car line-up, with the final entry list including ten different marques and a hugely impressive 12 models of car. Such is the enduring success of the BTCC that BMW and Toyota – two of the world’s largest automotive manufacturers – have produced all-new cars for the forthcoming campaign.

Five former champions, a record 18 race-winners, a host of young stars, several debutants, experienced heads and even an ex-Formula 1 driver make up the ultra-talented field as the appeal of the BTCC continues to go from strength-to-strength.

Britain’s biggest motor racing championship will be the only major motorsport series to boast exclusive live coverage of every race on a leading free-to-air UK television network in 2019.

Long-term television partner ITV will again broadcast the action live, free-to-air and in high-definition on ITV4 and online, as well as producing extensive additional highlights programmes.

The long off-season was launched into action with the announcement that Kwik Fit would become the new title sponsor of the BTCC, with long-term partner Dunlop continuing as official tyre supplier.

This year’s Kwik Fit British Touring Car Championship will comprise 30 races across ten events at eight venues around the UK, with the hugely popular and ultra-fast Thruxton circuit being rewarded with two race weekend dates in 2019.

The season commences on the Brands Hatch Indy circuit on 6/7 April and concludes on the world-famous Grand Prix circuit at the same venue on 12/13 October.

BMW made the call over the winter months to switch from the championship-winning 1 Series to the all-new 3 Series – to coincide with the launch of the latest road car model – and its partners at West Surrey Racing have produced a herculean effort to ready three new cars in time for the season.

The introduction of the car is another huge tonic for the manufacturer, team and championship, but it remains to be seen if the squad can hit the ground running.

Tom Ingram and Speedworks Motorsport – last year’s runners-up – secured official support from Toyota ahead of the 2019 campaign, which sees the outfit enter as a fully-fledged manufacturer for the first time. Excitement reached fever pitch when it was announced that the marque would be fielding the brand new Corolla, a model last seen in the series back in 1986.

With last year’s top two teams building new cars ahead of the 2019 BTCC season, manufacturer entries from Vauxhall, Honda and Subaru may be eyeing an opportunity to steal some early ground.

One of the favourites for Independents’ honours will be the Motorbase Performance stable, which enters multiple race-winner Tom Chilton alongside Ollie Jackson and Nic Hamilton – brother of five-time Formula 1 World Champion Lewis.

A trio of Mercedes drivers will undoubtedly be in contention with the Ciceley Motorsport-run pair of Adam Morgan and Daniel Rowbottom, plus Laser Tools Racing’s Aiden Moffat.

Another of the off-season’s notable stories included BTC Racing’s graduation to the new Honda Civic Type R (FK8). With Josh Cook and Chris Smiley carrying out driving duties in the mean-looking grey machines, the team will be looking to add to its victory tally this year.

Essex-based outfit AmD is again running four cars in 2019, with former F1 man and Le Mans winner Mark Blundell grabbing the headlines with his move into Britain’s biggest and best series. Blundell joins Jake Hill in the Audi S3s, whilst Sam Tordoff and Rory Butcher are the strong-looking pairing behind the wheel of two Honda Civic Type Rs.

Matt Simpson is another Honda racer and yet another race-winner on the grid, following a maiden success in 2018, and he has every chance of tasting more champagne during this campaign.

Team Parker Racing will keep fans of the BMW 1 Series happy as it runs a sole car for experienced driver Stephen Jelley.

One of the most exciting pre-season stories came just 24 hours ago when fans’ favourite Jack Goff secured a last-minute seat in one of Team HARD’s four Volkswagen CCs. Bobby Thompson, Carl Boardley and Michael Crees will be the other drivers for the Kent-based squad.

Last but by no means least on the BTCC entry list is an all-new team at Excelr8 Motorsport, who will have Sam Osborne and Rob Smith piloting the popular MG6s.

For 2019, TOCA has ratified a number of minor amendments to its regulations following an end-of-season consultation with the championship’s teams. Due to the incredibly closely-matched performance of the current cars, the maximum success ballast has been decreased to 54 kilograms and the remaining increments have been adjusted downwards.

Other rule changes were also made to the drivers’ strike system, red flags during qualifying and tyre options. Finally, Dunlop will introduce an entirely new wet tyre for the 2019 campaign.

In addition to these revisions, it was also decided that the advent of hybrid power – initially outlined for introduction from the 2022 season – may be brought forward to 2021 if all key parameters relating to the supply, engineering, costs, performance and testing of the hybrid units can be achieved in good time for an earlier launch.

The full 2019 Kwik Fit British Touring Championship field will now contest the only official pre-season test session at Brands Hatch tomorrow (27 March) before the serious business gets underway at the same circuit on 6/7 April.

BTCC Chief Executive, Alan Gow, said: “We are delighted to present our full field of drivers, manufacturers, teams and cars for the 2019 Kwik Fit British Touring Car Championship, as we head into yet another thrillingly unpredictable campaign in the UK’s biggest and best motorsport series.

“We have a potent line-up of champions, race-winners and emerging young talent, with a wide variety of cars and body styles represented on the grid. The two newest models – the BMW 3 Series and Toyota Corolla – are sure to cause quite a stir, and the commitment demonstrated by those two manufacturers in introducing new cars is testament to the championship’s rude health and enduring appeal.

“That is further endorsed by the confirmation that the BTCC is the only major motorsport series to benefit from extensive live, free-to-air UK coverage in 2019, which means fans unable to follow trackside won’t have to miss a moment of the thrilling doorhandle-to-doorhandle action.

“We have a new title partner in Kwik Fit, who are already looking to maximise their involvement in the greatest show in British motorsport.

“That is just one fascinating thread of what looks sure to be another captivating, drama-fuelled campaign – so whether you are following on television, online or soaking in the smells, sights and sounds at close quarters, strap yourself in and get ready to enjoy the ride.”