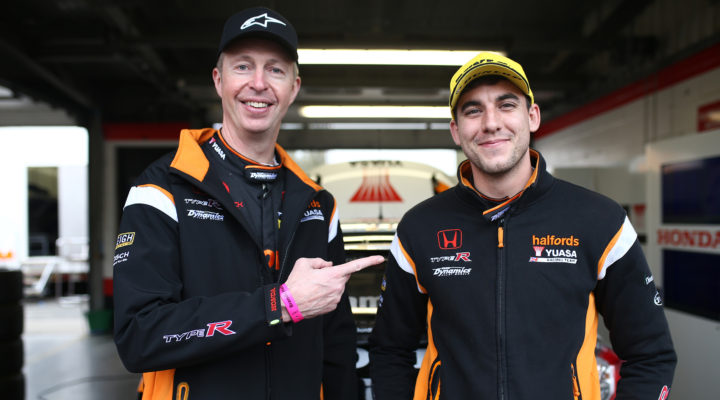 After a first season racing the latest FK8 version of the Honda Civic Type R in 2018, Team Dynamics Motorsport, which runs the factory-backed Halfords Yuasa Racing squad, made the most of the winter break. The car was upgraded over the off-season before the team embarked on an extensive pre-season testing programme. This stretched across the UK, from Knockhill in Scotland to Croft in Yorkshire before joining the official pre-season test day at Brands Hatch in Kent.

By the end of the full-day’s running, featuring all 30 BTCC entries, Dan Cammish had set third-fastest time in his Civic Type R. Team-mate Matt Neal was ninth-fastest, less than three tenths of a second behind, despite only taking part in the generally slower morning session. The Honda squad will hope to continue its promising form when the teams return to Brands Hatch for the opening three rounds of the 2019 BTCC on 6-7 April.

“We ended last season very strongly and I took two wins in the final meeting at Brands Hatch,” said Cammish. “While that was on the long circuit and the first round will be on the shorter Indy circuit, 95 per cent of it is the same and I almost got my first pole position at this opening round last season. We’ve had a good winter, made some improvements to the car and I’m definitely an improved driver. I’m feeling fit and healthy and can’t wait to get started.”

Matt Neal, Halfords Yuasa Racing driver and Team Dynamics Director added: “I’m really looking forward to the first races. We are starting our second season with the Civic Type R (FK8). The winter has gone well and I’m optimistic for 2019. Brands is the best place to start the season, on the shorter Indy circuit the races have a real stadium atmosphere. If I was a fan, Brands would be one of the first circuits I’d go to.”