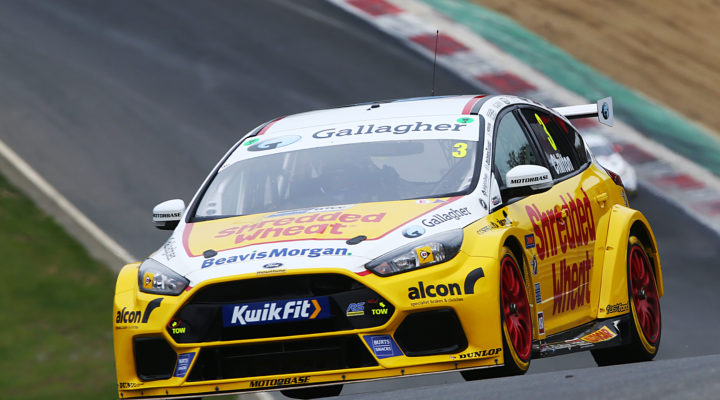 Thirteen-time BTCC race winner Tom Chilton is back behind the wheel of the squad’s Ford Focus RS, and heads into the new season as one of leading title challengers after ending last year in third place overall, and Independent Drivers’ runner-up.

Ollie Jackson makes a popular return to the Motorbase-run squad, and Chilton’s team-mate has shown early promise in pre-season testing. After completing his most comprehensive winter testing programme to-date, the Reigate racer is looking for a strong start to his seventh BTCC campaign.

After travelling to Spain and clocking up over 4,000 kilometres during an extensive pre-season testing programme, the Wrotham-based outfit has invested a huge amount of time and money in development and improvements over the winter period.

“We’re just coming out of what was probably our busiest and most intensive pre-season test session,” explains Team Manager Oly Collins. “The guys have worked relentlessly on developing the Focus RS, and as a result we feel more ready than ever heading into the opening rounds.

“Our key staff behind the scenes remains unchanged. We’re also enjoying another year with Tom, which is so important to have that continuity off the back of a great season last year. It feels like Ollie never left. He’s settled into the team really well. They’ve both done a fantastic job in pre-season and we’re aiming to surprise everyone this year.

“Our pace in testing has been strong. But from the times we saw at last week’s official test, as usual the BTCC grid is so close it could go either way. New cars, drivers swapping teams, changes in engineering, it’s all a little unsettled on the grid this year. It all feels right at Motorbase at the moment. Hopefully that will show on track!”

“I’m so happy to be back for my second year with my favourite ever BTCC race team, and also my local team,” said Chilton. “After ending the official test day as second fastest last week, I’m felling very positive for the weekend ahead.

“The guys at have done a lot of work on the chassis over the winter. The car has moved on a lot from last season and so far that’s showing in the times.  I’ve also been training hard and have dropped some weight to try and help improve the car’s performance further.

“It’s been a big effort from everybody involved, and we’re ready to start the year ahead. I’m raring to go!”

“I’m definitely excited and a little apprehensive in the build up to my first competitive weekend with Motorbase,” added Jackson. “I can’t wait to get out there in the Focus and prove what I can do with it. It’s a great car. The improvements made over the winter are proving their worth. Without a shadow of a doubt it’s going to be a strong season for the team. We just need to hit the ground running and get good results on the board straight away.

“The testing programme has been productive. It’s allowed me plenty of time to get used to the car.  There are still a few finer points for me with the setup and the guys in getting used to what suits me, but I already feel like I’ve contributed to moving us forward. I’m sure that when we hit the sweet spot I’m going to be right at the sharp end.

“The whole team; David, Oly, drivers, mechanics, engineers; everyone has been hugely supportive. They have helped massively in getting the best out of me. I’m going to do my best to repay them with results this year.”