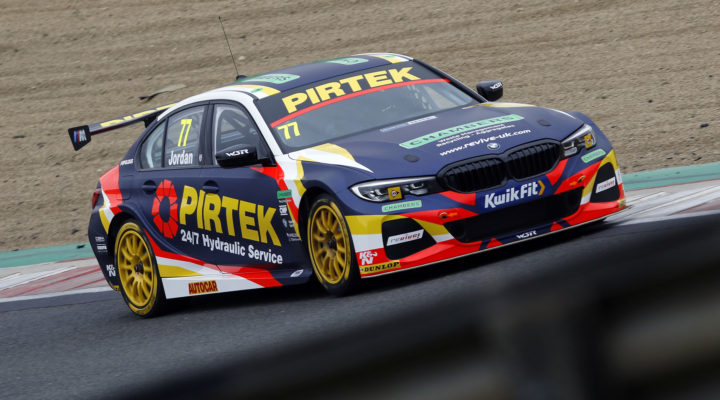 West Surrey Racing only completed build of its three cars on the eve of last week’s official pre-season test at the Kent venue, but early signs suggest the Bavarian 3 Series has huge potential.

“It’s quick out of the box but it’s also quite hard to drive with that set-up,” said Jordan. “We tried some things from Season Launch and it’s probably a bit harder to drive than it was then. I was surprised at the time because it was tricky. You could probably get it a bit nicer to drive, and be comfortable lap in lap out but I’m not sure it’d be much quicker.

“We’re somewhere near and we know where we are. My approach this year is drive every lap in this car as quickly as I can. If it’s good enough for tenth that’s all I can do, if it’s pole then great.”

Jordan ended the 40-minute run just 0.057s ahead of Sam Tordoff, who himself topped the recent test in his AmD Honda Civic Type R, whilst Dan Cammish was next up for the works-backed Halfords Yuasa Racing.

BTC Racing is another team running new cars in 2019, having upgraded to the newer shaped FK8 Honda Civic Type R, and Chris Smiley showed he is already getting to grips with the mean looking machine by taking fourth in the early running.

A total of six Hondas occupied the top eight positions with Matt Neal, Josh Cook and Rory Butcher also joining the party, whilst Ash Sutton in sixth ensured that Subaru was also in the mix.

Tom Ingram continues to develop the new-for-2019 Toyota Corolla as the Team Toyota GB with Ginsters star took ninth, ahead of an impressive lap from Stephen Jelley in the sole BMW 1 Series run by Team Parker Racing.

As is standard in the BTCC, the session proved extremely close with the top 26 drivers being covered by less than a second.

The final free practice session takes place at 12:05 before the all important opening qualifying session of the new season. Action for that gets underway 15:15 and will be streamed live via www.itv.com/btcc.