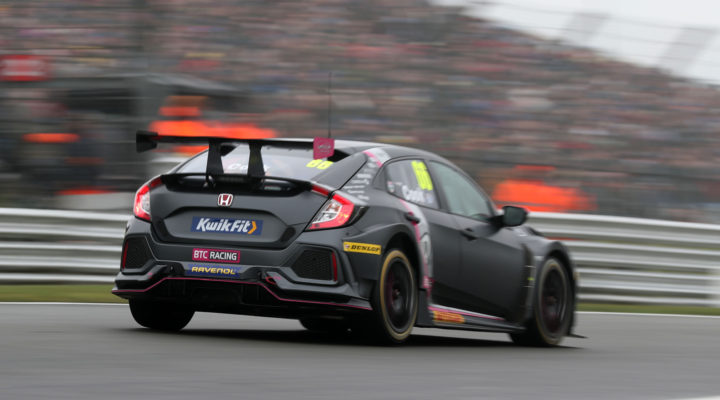 BTC Racing’s Josh Cook won the opening round of the 2019 Kwik Fit British Touring Car Championship after getting his tyre tactics spot on amid greasy conditions at Brands Hatch.

Fog and drizzle loomed over the Kent venue for much of the morning, which led to the top nine drivers choosing to run the all-new Dunlop BlueResponse wet tyre. Cook – starting the race in tenth – was the first of many further back to gamble on dry tyres, and it proved to be a tactical masterclass.

Adrian Flux Subaru Racing’s Ash Sutton made a stellar getaway from pole position as a trio of BMWs blasted by the Sterling Insurance with Power Maxed Racing Vauxhall of Jason Plato. Things got worse for Plato when he was handed a drive through penalty for a start line infringement, effectively ending his challenge in race one.

Cook dropped back initially as the wet conditions sent cars twitching around the 1.2-mile Indy circuit, but the tide turned on lap five when Cook set the fastest lap in his new Honda Civic Type R FK8. The Bath-racer began ripping through the order – bringing along a number of other dry tyre runners with him – and in just a matter of minutes he was on to the tail of race leader Sutton.

“The guys at BTC Racing have really put a lot of effort in over the winter,” said Cook. “That was for the team, they’ve done a great job. I didn’t think it was a big risk. It did start to get a bit slippy at the end with a bit more rain falling but it held off. I wanted to keep a gap to the guys behind just in case anything happened.
“There was no magic there just a bit of calculated risk and it’s paid off, luckily!”
Cook never looked back and it was merely a case of who would join him on the podium as the Dunlop SportMaxx-shod dry tyre runners began surging up the leaderboard.
It was local man Jake Hill who made his way into second, much to the delight of the home crowd, as the TradePriceCars.com Audi also made light work getting by the early leaders.
“Unbelievable!” said Hill. “That was exactly the same trick as we pulled last year. I can’t thank the team enough. To come here and get a podium on our first outing is just insane!”
Team Shredded Wheat Racing with Gallagher’s Tom Chilton finished third in the championship last season, and he completed the podium positions in the opener after he too fought his way through the field.
The Mercedes duo of Aiden Moffat and Adam Morgan swapped places several times in an eye-catching tussle, with the former claiming fourth ahead of his former stablemate.
Bobby Thompson and Stephen Jelley provided great stories in sixth and seventh respectively. Thompson produced a brilliant result in the Team HARD-run VW, whilst Jelley bounced back from heartache yesterday when he was disqualified from qualifying after his car failed a post-session ride height test.
The first home of the wet runners went to Halfords Yuasa Racing’s Matt Neal as he relegated Sutton down to ninth with an impressive move late on, whilst the AmD Honda of Rory Butcher completed the top ten.
A special mention too for both Michael Crees and Mark Blundell who both scored championship points on their respective BTCC debuts.
The 30-car field with be back on-track at 14:15 for race two with all of the action being screened live and exclusively on ITV4.