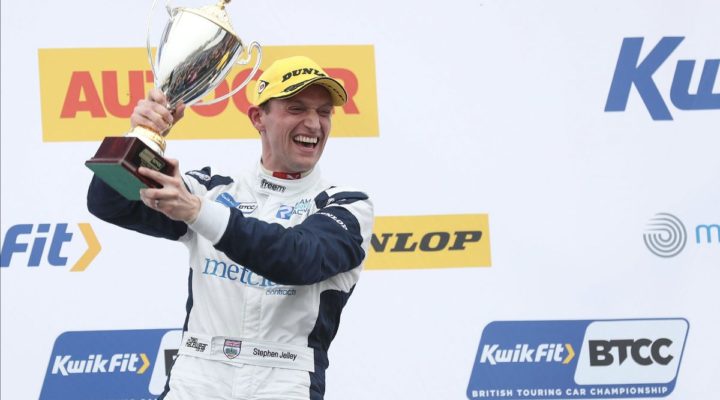 Team Parker Racing enjoyed its best weekend to-date in the Kwik Fit British Touring Car Championship, with Stephen Jelley securing a first-ever podium finish for the team as the 2019 season got underway at a foggy Brands Hatch Indy circuit.

The weekend could so easily have gone a different way after Stephen’s eighth-place qualifying performance was ruled out as the car failed its post-qualifying ride height checks after a trip across the grass bent the exhaust as he re-joined the track.

Starting race one from the back of the grid, the team took a gamble and fitted soft ‘Option’ Dunlop SportMaxx tyres to its BMW 125i M Sport – running the new BMW engine for this season – and it paid immediate dividends with Jelley overtaking four cars off the line and setting him up for a remarkable 24 laps. He reeled in rival after rival and fought his way inside the top ten before eventually finishing in seventh position, having made it by 23 cars.

In race two, he fell back to ninth on the opening lap, but quickly climbed back up to sixth and was part of a close battle for the final podium position. On the penultimate lap he made his move for third but ran wide on a damp part of the circuit, finishing in sixth – the team’s best ever finish to that point – just 0.295 seconds shy of second place.

The best was yet to come, however, as he set off like a rocket from the grid in race three, moving from sixth on the grid to the race lead after just two corners. With drivers on softer tyres fighting back, Jelley was in a fight for second and third places and kept the pressure on, taking an historic first podium finish for Team Parker Racing.

“It’s fantastic, the car was great all weekend,” said Jelley. “The team asked for three solid points finishes and that’s what we’ve come out with, and a first podium for the team as well – it’s absolutely mega.

“We had to start the first race in 30th. Fortunately, the weather was a bit sketchy and we made the right choice on tyres, so I managed to carve through from last to seventh and that’s what set the weekend up. Arguably, I could have put a move on earlier in race two, but it would have been too risky and we bagged a good amount of points.

“The start of race three was great! We were just on a slight crest of the hill so I knew if we got it right, we could use that downhill run to just reduce the wheelspin. It worked a treat and I just carved through. We were nearly in the lead in turn one and managed to do the switchback and slide up the inside into Druids. It was a bit of a sketchy move, but I just thought ‘this is going, I’m sending this.’

“The balance of our car wasn’t as good in the final race as it had been all weekend and I could see there was a good gap to fourth, so I didn’t want to fight too much and have the whole pack come back to us. Matt’s [Neal] tyres then went off and I got stuck behind him and Rory [Butcher] caught up. We had a bit of a coming together with Matt, so I had to give the place back which meant I had to concede third to Rory but then Matt got a puncture on the last lap. It’ was a very good weekend. We can build from here.”

Stuart Parker, Team Manager, added: “We felt we’d let Stephen down [in qualifying]. For him to come back from last on the grid to a podium in race three is absolutely fantastic. There is barely a mark on the car.

“I think we outscored what we’d done in four years in race one and we leave Brands Hatch third in the championship having had three top ten results. It’s absolutely outstanding and fair play to all the lads who work on the car and to Stephen, they’ve all done a fantastic job and all the credit is due to them.”