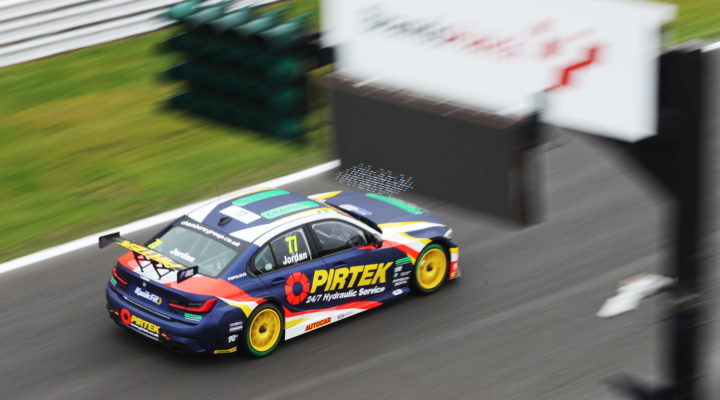 BMW’s new 3 Series BTCC challenger made quite an impression on debut at Brands Hatch, with Andrew Jordan scything through to victory from 15th on the grid in the second race of the 2019 season.

Quick out-of-the-box in testing, Jordan topped the timesheets in the BMW Pirtek Racing entry in FP1, before Tom Oliphant led a commanding BMW one-two-three in FP2 ahead of Jordan and Team BMW stablemate Colin Turkington. The trio starred again in a mixed-conditions qualifying session to secure third (Turkington), fourth (Jordan) and fifth (Oliphant).

On a damp track in race one, Jordan vaulted into second place at lights-out at the head of a BMW triumvirate, but as the circuit dried out, the Dunlop BluResponse wet tyres on his 3 Series faded and the 2013 title-winner had to fight hard to fend off a gaggle of Sport Maxx dry-shod competitors, hanging on to secure a points-paying finish in 15th.

Fired-up by that disappointment, the 28-year-old leapt off the line at the start of race two and gained eight positions on the opening lap alone. Going on to scythe his way past rival after rival, he grabbed the lead with a decisive move at two-thirds distance and never looked back, registering the new 3 Series’ maiden triumph in only its second race. With maximum success ballast on-board and the less-favourable soft-compound tyres, race three was more of a struggle but Jordan had already made his mark.

Reigning champion Turkington endured a more difficult start to his title defence, suffering like Jordan in race one as he crossed the finish line a frustrated 19th, and then grappling with the soft ‘Option’ tyres in race two en route to 14th at the chequered flag. Back on the harder-compound rubber for race three, the Northern Irishman fought to fifth place – posting fastest lap for a bonus point.

Turkington was followed across the line by Oliphant in the sister car, with the Team BMW newcomer rapidly getting to grips with the 3 Series as he ably kept pace with his two high-profile team-mates. Sixth position in the finale added to 22nd in the opener and 15th in race two, with the 28-year-old struggling in much the same way as Turkington on the wets and soft-compound tyres.