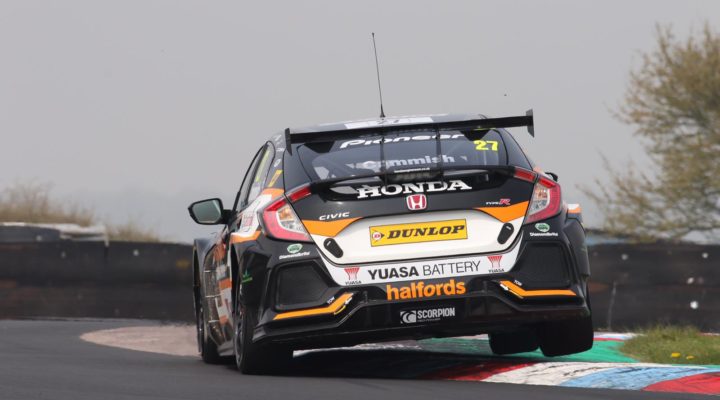 The annual official TOCA Test Day at the Hampshire circuit yields the opportunity for teams and drivers to acclimatise themselves to Thruxton’s unique characteristics ahead of the calendared race weekends in May and August.

It was Halfords Yuasa Racing that hit the ground running with Cammish setting a time 0.685 seconds quicker than the next fastest driver – BMW’s Colin Turkington.

“It’s always nice to be quickest. We went very well here last year and did a good job. Matt (Neal) was on pole. Out of the box this morning, the car felt very strong.

“We’re working through our programme and there were a few laps in there that would have been good enough for pole.

“Shame about the little bit of damage. Matt had an issue with his car and jumped into mine and I think he got caught in traffic there before a little off. It’s fine, though, just a small prang!

“As a driver, I’ve come long way since this time last year and so has the car. We’ve made improvements over the winter and we’ll see a bit more from it here.

“As a package we should be strong. Right now I’d have to say I’m glad we’re coming here twice.”

Tom Ingram notched the third quickest time in the new Toyota Corolla, expertly catching a major moment through Church – the fastest corner at the fastest circuit in the country – in the process.

The afternoon’s running is set to get under way at 1510 and all of the timing can be found at btcc.net/live.