Battle for early BTCC initiative rumbles on to Donington Park 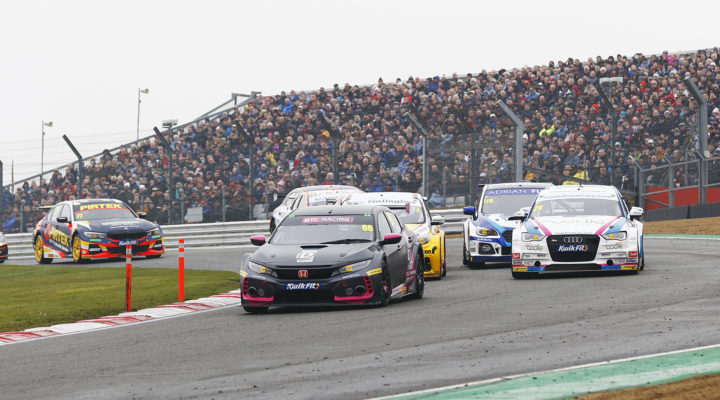 The Kwik Fit British Touring Car Championship threw up a storming opening weekend at Brands Hatch a fortnight ago, and the battle to wrest control of the early-season formbook will continue next weekend at Donington Park (27-28 April).

Three rounds in Kent yielded three different winners, with a victory apiece for Josh Cook, Andrew Jordan and Rory Butcher after Ash Sutton had taken pole position the previous day. It wasn’t just the top step of the podium, but the whole rostrum that proved to be a hard-fought battleground, as eight drivers climbed the steps over the course of a frenetic race day.

Anybody’s game…
With conditions ever-changing at Brands Hatch, it’s still to be seen where the balance of power lies as teams and drivers fell foul or took advantage of varying levels of grip from lap-to-lap. Those that gambled on the famous venue drying out in the opener and took to Dunlop Sport Maxx slicks were rewarded with a big points haul and a strong platform for the following two encounters.

Cook gutsily rolled the dice and, as a result, he leads the way in BTC Racing’s newly-built current generation Honda Civic Type R (FK8), topping the Drivers’ Championship heading to Leicestershire with his team profiting to lead the Teams’ and Independent Teams’ running, while BMW and Honda find themselves deadlocked at the summit of the Manufacturers’ table.

Seven different marques are represented in the Drivers’ standings top ten, with the first Manufacturer-backed entrant – Subaru’s Ash Sutton – lying in seventh, illustrating just how competitive a championship the BTCC continues to be. Picking the race-winners at Donington Park will be as difficult as ever, and quite which combination of car and driver looks strongest is anybody’s guess. Current leader Cook notched a maiden BTCC victory at the circuit in 2018 after securing pole, while the Honda he now drives performed capably there in just its second outing last year – an indicator, perhaps, that he may be harbouring a quiet confidence ahead of Rounds 4, 5 and 6.

“To head to Donington Park as leaders is pretty good, I’d say!” enthused Cook. “We’ve not had a lot of running and the guys at BTC Racing have done a great job of putting the new car together over the winter.

“It was a fact-finding mission at Brands Hatch to try and see what worked and what didn’t. The first race was a gamble that paid off and to score two more points finishes was great. We have a data share with Team Dynamics (preparation partner for Honda’s factory BTCC team) and they’ve given us a platform to work from. It’s great to have a partnership with such a strong outfit, but all credit to the guys back at base – they’ve drawn it all together.

“Arriving at Donington Park with maximum ballast will make things a lot more difficult, but we know what our strengths are and we’ll play to those. There’s a long way to go but we just need to keep scoring points and see where we are at the end of the season.”

Donington Park is a fans’ favourite, as well as a favourite of many of the championship’s drivers and it’s a circuit that rarely disappoints in terms of on-track action. Circuit owner MotorSport Vision continues to ring the changes in a bid to improve the fan experience following its acquisition of the world-renowned venue a couple of years ago. For 2018, huge crowds enjoyed new grandstands, a restaurant and additional facilities accompanying the spectacle offered up by the BTCC and accompanying TOCA package and they can expect more welcome improvements to spectator areas – including a brand new spectator entrance to the paddock on this visit.

As is the case for each of the BTCC’s ten events, everything is broadcast live and free-to-air by the championship’s longstanding partner ITV on ITV4, the ITV Hub and online at itv.com/btcc.

Local heroes
BMW Pirtek Racing’s Andrew Jordan secured the new 3 Series’ first victory in the BTCC on its debut weekend back at Brands Hatch and he’s been a man exuding an air of confidence and excitement ever since he first turned the wheel of the 330i M Sport a month or so ago.

“I think we’re looking in strong shape,” said Jordan. “We don’t carry much weight going to Donington and I think we should be particularly quick in race trim. I felt confident in the 3 Series from the get-go – it really feels like my car – and in a championship as close and competitive as the BTCC, you can never underestimate the importance of that. I felt really comfortable in the car in race two at Brands – and that was reflected in the result.

“My philosophy is just to drive every lap in a brilliant new car flat-out – not to worry about winning races or championships. I want to enjoy it and it’s a different mindset for me this year.”

BTCC legend, triple champion Matt Neal, hails from Stourbridge so counts Donington Park as home soil and it’s a seminal circuit for him. As the now well-known story goes, he prised £250,000 from the pocket of BTCC Chief Executive Alan Gow when he became the first Independent driver to win a race outright in the modern era in 1999.

It’s not only Neal’s back yard but Team Dynamics’ too. The outfit runs the Halfords Yuasa Racing operation and is itself an iconic name in the series’ history.

Stephen Jelley comes into the weekend off the back of a best-yet for Team Parker Racing in the BTCC, with the Leicestershire racer scoring the outfit’s maiden championship podium in the finale at Brands Hatch Indy. Team Parker, also Leicester-based, has fitted the current BMW powerplant into its 125i M Sport and it appears to be paying immediate dividends – the squad outscoring the cumulative points haul of its previous four seasons in one outing in Kent two weeks ago.

“The result at Brands Hatch was just perfect,” said Jelley. “The podium for Team Parker Racing was by far the most important thing – I wasn’t thinking of risking it for the race win.

“The car was great all weekend. The team asked for three solid points finishes and that’s what we came out with, and a first trip to the rostrum for the team as well – it was absolutely mega.”

“I think we outscored what we’d done in four years in race one alone, and we head to Donington Park third in the championship having had three top ten results at Brands,” added Team Manager Stuart Parker. “It was absolutely outstanding and fair play to all the lads who work so hard on the car and to Stephen, they all did a fantastic job.”

Toyota’s turf
Next weekend, Donington Park will welcome 4,500 supporters comprised of members and their families from Toyota Manufacturing UK (TMUK), based at nearby Burnaston. They will be out in force, cheering on Team Toyota GB with Ginsters, with the Japanese marque back in the BTCC this year as a Manufacturer for the first time in more than two decades.

Testing times
Between the Brands Hatch curtain-raiser and the upcoming visit to Donington Park, the BTCC field completed a comprehensive test day at Thruxton in Hampshire on Wednesday (17 April), as drivers and teams look to dial in their 2019 machines at this embryonic stage of the season.

Honda’s Dan Cammish topped the timesheets on the day, with the fellow Civic Type R (FK8) of Chris Smiley in close company. A good sign for the pair, but not necessarily an indicator of where they will be come Donington Park given Thruxton’s unique nature.

Timetable and tickets
The second race day of the 2019 Kwik Fit British Touring Car Championship takes place on Sunday 28 April, with all three BTCC encounters – and many of the day’s other races to be broadcast live and in high-definition on ITV4. Those in attendance at the circuit can stay in touch with the commentary and live timing from every session, available at btcc.net/live throughout the weekend.

Tickets are available in advance from just £28 for race day and £38 for the full weekend’s action, with free entry for children aged 13 and under.