AmD looks to build on trophied start to 2019 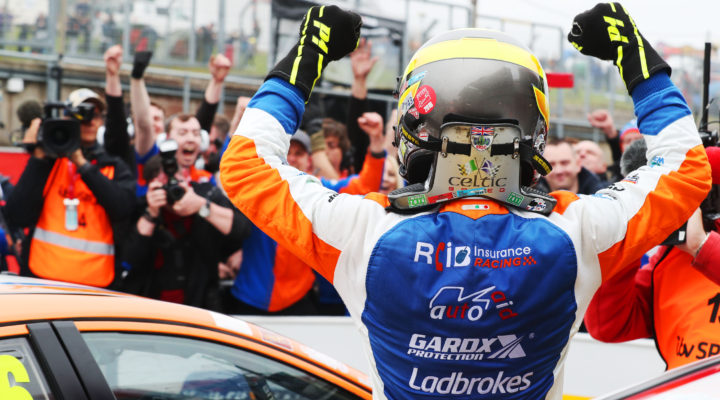 Cobra Sport AmD with AutoAid/RCIB Insurance Racing team is seeking to build on a strong start to the 2019 Kwik Fit British Touring Car Championship at Donington Park this weekend.

The West Thurrock-based team secured its first win in the series at Brands Hatch earlier this month thanks to Fife racer Rory Butcher, who heads to the East Midlands circuit sitting fourth in the standings as a result.

Three top ten finishes at the wheel of his Honda Civic Type R marked a solid start to the campaign for the Scottish star, who also tops the Jack Sears Trophy standings for those drivers who went into the 2019 campaign without an overall podium finish.

Butcher showed strong pace during testing at Thruxton last week where he was third quickest of the 29 drivers in action, leaving him to head into the Donington meeting in confident mood.

“I’m feeling really good heading for Donington on the back of the results at Brands Hatch and the performance in testing at Thruxton last week,” said Butcher. “As a team, we are working really well and I feel we are in a strong position to challenge for some more solid results on track.

“The only issue we could face is that the weather forecast seems to be quite unpredictable but at the same time, we know that the Honda is a strong package regardless of whether it is wet, dry or mixed.

“I learned very early in my BTCC career how important it is to keep scoring points and moving forwards, because silly mistakes in qualifying or the opening race can really put you on the back foot for the rest of the weekend. That worked for me at Brands Hatch and I’m taking the same approach into Donington Park, where I’m eager to bring home three strong finishes.

“If we can come away with some more silverware then that will obviously be fantastic, but points make prizes when we get to the end of the year and we have to keep picking them up.”

Team-mate Sam Tordoff, by contrast, endured a tough weekend at Brands Hatch that saw him fail to score on his debut with the team, with the Leeds racer one of a number of fancied runners to find themselves in the wars in Kent.

Despite that tough start, Sam was back up to speed during the Thruxton test between Brands Hatch and Donington Park, where the #600 Honda ended the day firmly inside the top ten.

Having been one of the pace-setters throughout pre-season testing, Tordoff now heads to Leicestershire and Donington Park – a circuit where he has been victorious in the past – eager to get his championship challenge underway and with his focus firmly on pushing for a big haul of points.

“We’ve got to the bottom of the issue that I had at Brands Hatch and the test at Thruxton has validated that,” said Tordoff. “Now, I can head for Donington Park with my focus firmly on getting my season underway.

“Realistically, I’d say we are around 30 points down on where we should be after round one, but it’s a long season and there is no need to panic. There is plenty of time to recover, and we’ve seen in the past how drivers can have a difficult start to the year and still be right in contention at the end of the season.

“I’m heading for Donington feeling confident as we had a strong test there before the season started and it’s a circuit where I have gone well in the past. With no additional weight to carry into the weekend, we should be in a position to qualify well and then hopefully we can put some good points on the board. For me, the season starts now.

“Regardless of what the weather conditions may be, I’m sure we’ll be right in the mix.”

Shaun Hollamby, Cobra Sport AmD with AutoAid/RCIB Insurance Racing Team Principal, added: “Brands Hatch was very much a weekend of highs and lows and whilst it was great to see Rory get his first win, it was hugely disappointing for Sam because of the issues he faced.

“With both cars now fully back up to speed as we showed in the test at Thruxton, we head for Donington Park confident that both Rory and Sam will be able to fight at the sharp end of the field. Sam in particular should benefit from the lack of ballast he’ll be carrying, and there is no reason why both drivers can’t look to score big on race day.

“Having secured silverware at Brands Hatch, we’re keen to add to it this weekend.”