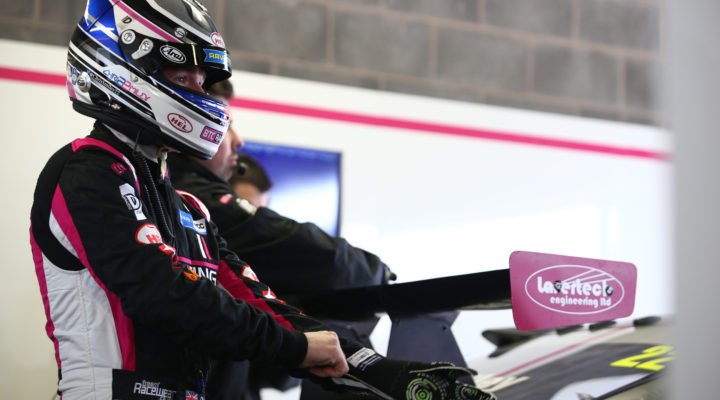 The majority of the session took place in wet conditions – as was the case in FP1 – and it was the likes of Dan Cammish (Halfords Yuasa Racing) and Ash Sutton (Adrian Flux Subaru Racing) that showed their form around the 1.98-miles of slippery Tarmac.

A dry line appeared in the final five minutes, however, allowing some runners to switch to the Dunlop Sport Maxx dry tyres, and the lap times immediately began to tumble.

Adam Morgan slipped into top spot in the closing moments, before he was then pipped to the post by Smiley’s FK8 Honda Civic Type R as the chequered flag fell.

Smiley’s performance ahead of qualifying again highlights the prowess of the BTC Racing squad which currently leads the Teams’ and Independent Teams’ standings, whilst Morgan is another looking to build on his strong Brands Hatch opener three weeks ago. Morgan’s Mercedes had looked to be struggling in the wet, but the Mac Tools with Ciceley Motorsport man immediately came alive when the rain cleared.

“At the minute we’re struggling on the wets and we’re not to sure why,” said Morgan. “We changed the geometry of the car over the winter and our usual wet setup isn’t giving us the performance on the tyre that we need. We’re still head-scratching a little bit. It’s not difficult to drive.

“I want it to feel difficult to drive but it feels okay, and in FP1 was two seconds off the pace which was a bit of a slap in the face. I’m confident we’ll be up there in the dry though.”

Rory Butcher claimed a maiden victory at Brands Hatch last time out, and the Cobra Sport AmD AutoAid/RCIB Insurance driver is going well again here at Donington as the Scotsman set the third fastest time, ahead of the impressive Team HARD duo of Jack Goff and Bobby Thompson.

Ashley Sutton’s Subaru came home ninth, wedged in between the other two VWs of Michael Cress and Carl Boardley. It was a memorable session for the Kent-based Team HARD outfit with all four of its CCs finishing inside the top ten.

Qualifying for Round 4 of the 2019 Kwik Fit British Touring Car Championship will take place at 15:15, with all of the action being streamed live and exclusively via www.itv.com/btcc.