Jordan edges out Sutton in FP1 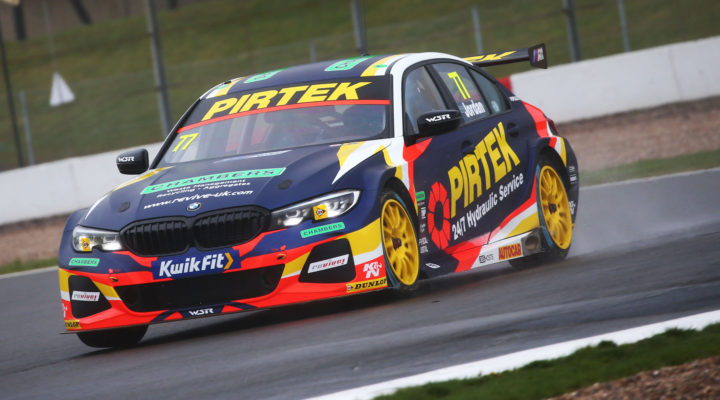 Andrew Jordan set the fastest lap time in a damp and drizzly opening BTCC Free Practice session at Donington Park, as he edged out 2017 Champion Ash Sutton by just 0.050s.

“It felt good out of the box and we worked through some changes in FP1,” said Jordan. “We’ve got some bigger changes to put us in the ballpark for qualifying. I just feel very at home in the 3 Series and I did from very early on in the first test.

“We probably had to reevaluate our expectations after Brands Hatch but we won’t get carried away. If we can be up there week in, week out then that’s the ideal. It’s my local track here and I love it. I’ve got lots of friends coming, hopefully it’s going to be a great weekend.”

Light ran fell throughout the 40 minutes of running which was also halted early on when high winds moved a tyre stack on to the circuit. There was one further stoppage when Nic Hamilton went off at Redgate late on, but there was no shortage of action as all drivers got to grips with the new Dunlop BluResponse wet tyre.

With conditions expected to remain wet for much of Saturday it was vital to collect valuable data ahead of this afternoon’s qualifying session, although overall lap times were understandably hard to judge.

The big guns were out in force at the top of the timesheets, however, as Dan Cammish (Halfords Yuasa Racing), Tom Ingram (Team Toyota GB with Ginsters), Colin Turkington (Team BMW) and Jason Plato (Sterling Insurance with Power Maxed Racing) followed Jordan and Sutton in the order.

BTC Racing’s Chris Smiley was seventh overall, ahead of the AmD Honda pairing of Rory Butcher and Sam Tordoff, whilst Jack Goff rounded out the top ten in the RCIB Insurance with Fox Transport VW.

Free Practice 2 of the Kwik Fit British Touring Car Championship at Donington Park will take place at 12:35, before qualifying kicks off at 15:15, which will be streamed live via www.itv.com/btcc.