Turkington keeps his cool to claim race one win 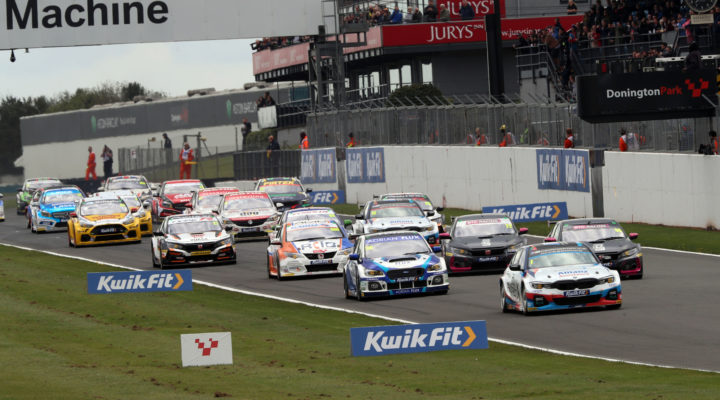 Team BMW’s Colin Turkington converted his first BTCC pole position in over two years into a relatively comfortable race one win, whilst a frenetic contest behind him created plenty of drama.

A multiple car accident on lap one led to several retirements and heavy damage to a number of cars as Andrew Jordan’s BMW slid sideways on the exit of the Old Hairpin. The Mercedes of Adam Morgan had nowhere to go while Ollie Jackson’s Ford, Matt Simpson’s Honda and Jake Hill’s Audi also crashed out of the action. Stephen Jelley’s BMW and Aiden Moffat’s Mercedes were caught up in the collision too but both continued.

Unfortunately the contact continued after the restart as Sam Tordoff’s Honda bumped with the newer Civic of Josh Cook, leaving the latter with a damaged left rear and out of contention. The incident led to a gaggle of cars vying for position with BTC Racing’s Chris Smiley also being shuffled down the order.

A separate incident between Moffat and ROKiT Racing with Motorbase’s Nic Hamilton sent the Ford Focus into the wall and a further safety car period was required.

Thankfully things settled down after the restart and Turkington cruised home ahead of Sutton and Oliphant, with the race winner also setting a new lap record of the 1.98-miles circuit.

“Brands Hatch was a difficult weekend for me,” said Turkington. “Circumstances went against us and there’s no better feeling than winning races. I only won one last year and this is the second now for the new 3 Series. I’m fine tuning it to my style and I’m really liking it. We’ve come out of the box really fast and close to our potential.
“I’m going to need a few more wins this time! Last year was just points and consistency but as usual, the bar is raised. There are even quicker cars out there and serial wins will be required. 54 kilograms is new territory for us. I’ve not had weight in the car before and we’ll give it our best go.”
Halfords Yuasa Racing’s Matt Neal headed an eye-catching quartet to claim fourth ahead of Tom Ingram (Toyota), Dan Cammish (Honda) and Smiley (Honda) behind him.
Team Shredded Wheat Racing with Gallagher’s Tom Chilton now leads the overall standings after finishing in eighth place, whilst the Sterling Insurance with Power Maxed Racing duo of Jason Plato and Rob Collard completed the top ten positions.