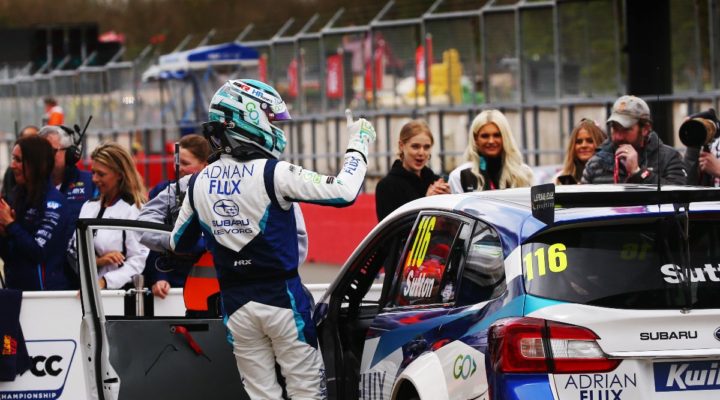 Ashley Sutton moved to the summit of the Kwik Fit British Touring Car Championship standings at Donington Park this past weekend after scoring a pair of podium finishes.

Entering the second event of 2019 having starred at Brands Hatch, the Adrian Flux Subaru Racing driver staked his claim as a credible contender to this year’s crown with another virtuoso performance.

Coming off the back of clinching pole position at the season-opener, the 2017 champion enjoyed another strong qualifying session, this time under the flight path of East Midlands airport.

With ever-changing weather conditions and three red flag stoppages adding to the challenge, Sutton piloted his Adrian Flux-sponsored Levorg to a best time of 1m10.535s – which was good enough for third place.

Launching off the second row of the grid as the lights went out for race one, Sutton got the jump on former team-mate Josh Cook heading into Redgate to secure second place, where he would ultimately not be troubled for the remainder of the race.

A multi-car accident on the opening lap further back brought the first of two safety car periods; and as the race restarted on both occasions, the BRDC Superstar was hot on the heels of leader Colin Turkington.

Despite remaining within touching distance of Turkington, Sutton was unable to make a serious move for the lead and ultimately held station to score his second podium of the campaign.

With additional success ballast on-board his Adrian Flux-backed machine for race two, the former Jack Sears Trophy winner served up a defensive masterclass to score his second podium of the day.

Briefly losing second place to Tom Oliphant as the lights went out, Sutton fought back to regain the place on the opening lap and began to settle into the race. As the laps ticked by, and two safety car periods breaking up proceedings, the manufacturer-backed ace was to slip down to third later on after resolutely fending off Matt Neal.

Having his mirrors filled with Tom Chilton and Rory Butcher in the final laps, Sutton held off the advances of the chasing pack and crossed the line in third, further strengthening his early championship charge.

Starting eighth virtue of the reverse grid encounter, Sutton bagged yet more vital points in race three as he finished fifth. Despite bolting the hard tyre on his Subaru, Sutton enjoyed a wheel-to-wheel battle with former team-mate Jason Plato and then Jake Hill, dispatching the pair of them in the latter stages with two well-timed overtakes.

Taking the chequered flag to round out the top five, the multiple race-winner capped off his earlier two podiums with a solid haul of points.

“I’m over the moon with how the weekend has gone, to come away as championship leader leaves me feeling a little surprised but really happy,” said Sutton. “We’re showing that you don’t need to be winning every race and that instead it is just as important to be there in the background scoring solid points.

“The car was phenomenal all weekend, wet and dry, and a lot of credit has to go to the team. Getting the best out of the car in the tricky conditions during qualifying set us up for a really strong race day. We maximised everything we had across all three races and that has shown in the results we’ve come away with.

“Everything clicked, and that doesn’t often happen in the BTCC, so we leave Donington in high spirits. We’ll have to carry full weight into Thruxton so we will see how we go there in a couple of weeks. The most important thing is that we have the points in the bag.”