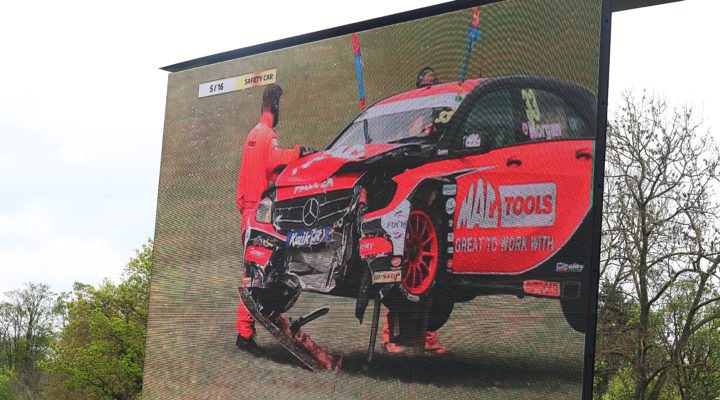 Donington Park was not kind to the Ciceley Motorsport squad, with Adam Morgan’s Mac Tools-backed Mercedes-Benz A-Class a victim of the opening lap melee in race one, leaving the team with a major repair job to ensure it’d be able to continue.

Morgan was mid-pack after a difficult qualifying session. Ever-changing conditions created a lottery as the rain fell, stopped and fell again. Starting 14th, and running the harder Dunlop Sport Maxx option tyre, he found the sideways BMW 330i M Sport of Andrew Jordan in-front of him and unavoidable on the exit of the Old Hairpin.

Morgan was okay if a little winded, and the team now had the mammoth task on their hands of replacing the entire front end of the Mercedes in just under two hours if he was to make the grid for race two.

Team Principal Russell Morgan had provisioned for such an eventuality, however, with a full drop-in front-section with engine, suspension and ancillaries all ready to go. His team beat the clock, completing the job in an astonishing 51 minutes, ensuring Morgan made it to the grid for the second encounter.

“It was an amazing job from the guys,” he said. “When I got out of the car, I thought I would be a spectator for the rest of the day, but everyone did a fantastic job and my Fuchs Lubricants-backed Mercedes looked as good as new.”

After the adversity came the fightback, from 28th on the grid. He charged to 12th, despite the car’s setup needing work after impact and repair.

“The car wasn’t perfect,” explained Morgan. “I was over the moon to get a result like that given the damage earlier, though. That was a points finish and the goal was a top 20, so 12th was amazing. It gave us a good shout at progress in race three if we worked on the setup.”

On the soft ‘Option’ Sport Maxx tyre, Morgan quickly caught up with a pack of cars up ahead on harder, grey-sidewalled Dunlops. Progress then became difficult, however.

Eighth was Morgan, and Mac Tools Racing with Ciceley Motorsport’s reward for a trying day at the office.

“When the car was brought back at the end of race one, we all looked at it wondering if that was the end of day,” added Morgan. “To get it back out was a major result and so 12th and eighth is outstanding in the circumstances.

“Two points-scoring finishes is a relief I suppose – it wasn’t our best day but it could have been so much worse. More than anything, it shows what this team is capable of and just what the lads in the garage can do.”

Ciceley Motorsport’s Commercial Director Norman Burgess said: “We’ve never had a day like that with such damage and then two positive results.

“Everyone in the team mucked in and worked so hard to repair the damage and get Adam back on the grid. We achieved that, we didn’t miss the pit-lane closing time and were on the grid. That’s proof of just what a great team of we have here.

“Obviously, there was concern from all of our Mac Tools guests for both Adam and Andrew Jordan, but they were unscathed and all of our guests watching on were delighted with the outcome of race three.”

Dan Rowbottom in Ciceley Motorsport’s second car, run under the Cataclean Racing banner, had a positive weekend, too, with the BTCC rookie taking a career-best of 17th place in race three.

A snapped earth lead halted his progress in race two. For Rowbottom, mileage and increasing confidence in the car were the order of the day on his second weekend in the championship.