More points for Motorbase, with Chilton in touch at the top 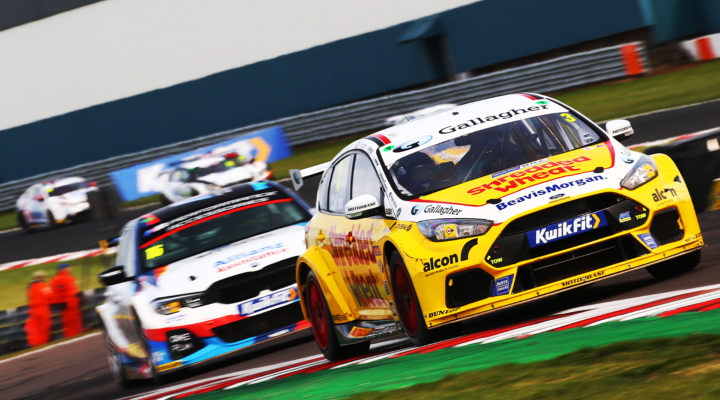 Tom Chilton led the charge for the Motorbase-run outfit during the second race meeting of the year. After securing consistent points finishes in each of Sunday’s three contests, the Reigate-racer now sits at the top of the Independent Drivers’ standings and tied for third place in the overall title battle.

Race 1’s frenetic opening lap immediately brought the safety car into play. With multiple cars involved, Jackson’s #48 Ford Focus RS found itself in contact, unsighted in the melee, and tipped into a spin collecting race-ending damage. Chilton picked his way through, making the most of the restart and weaving his way through the pack to take eighth at the chequered flag.

The Surrey driver showed race-winning pace out-of-the-blocks in Race 2. A surge around the outside of the pack as it charged through the Craners, sawn the 34-year-old beyond Chris Smiley’s BTC Racing Honda for seventh. After setting his sights on Ingram, the #3 Focus RS took fourth by lap 10 with an eye on the podium. A late move proved to be just a little too far out of reach, and Chilton eventually crossed the line in fourth, claiming his first Independents’ win of the season and taking both the Independents’ and Drivers’ standings lead.

Jackson’s tenacity was repaid in the second encounter, as he delivered a flawless drive from the back of the grid to work his way into the points-scoring zone by the half-way point. Making up an impressive 16 places over the 19-lap challenge on the way to 11th, opening his 2019 points-scoring account.

Running on the hard-compound Dunlop Sport Maxx for the final race of the day, the Motorbase pairing set about managing their pace with the soft ‘Option’ tyre the preference. Twelfth and 16th for Chilton and Jackson, respectively, was as much as the pair could muster.

Team Shredded Wheat with Gallagher reside in second place in the Independent Teams’ Championship heading to Thruxton while Chilton leads the Independent Drivers’ running, and sits third-equal in the Drivers’.

“We’ve qualified 13th twice in a row now,” said Chilton. “At Brands Hatch, we hadn’t run on the Dunlop BluResponse wet tyre before, and then at Donington Park, every time I was on a fast lap, there was a red flag on the corner of the chicane so I never got the chance to set my best time. I was positive coming into race day after the double podium at Brands from the same position.

“Race 1 was a great start to the weekend. I carved my way through the field and kept out of trouble and I was really happy with eighth given the 48 kilograms of success ballast on-board. I went into Race 2 excited with the weight out, and I went a good half a second a lap faster. I was skimming Matt Neal’s bumper at one point and closing in on Ash Sutton. I was so close to the podium. It was great that we got the Independents’ win and fourth place to seal the championship lead.

“The reverse grid worked reasonably well for us in Race 3, but we were on the hard tyre which wasn’t the ideal in the conditions. I wasn’t too upset with my pace at the start of the race, but it dropped in the second half. We really struggled on through the later laps and went from a comfortable fifth place to 12th. We’ve learnt an awful lot about the hard tyre this weekend which is great heading to Thruxton. After Race 2, I was leading both the overall and Independents’ championship, which is the first time I’ve ever done that.”

Jackson was happy to get the monkey off his back at Motorbase with his first points-score.

“I’m was pleased to get points in the bag in Race 2,” said Jackson. “I had a good run through the field. The shunt in the first race spoilt the day for us though, really. Once again, it was just a bit of bad luck that had a huge impact on my weekend. The boys did a fantastic job to get the car back out there for Race 2, it was a huge achievement that we even made the grid, so I was really happy to get it up to almost the top ten.

“I’m getting more and more confident in the car and I think it’s another weekend of progress, just not really a weekend of results, unfortunately.”

Team Manager Oly Collins added: “It was a similar weekend to Brands Hatch, on reflection with solid pace from both drivers. Ollie was desperately unlucky again to lose what should have been a good Race 1 result which would have set him up for the weekend, but instead resulted in a DNF through no fault of his own and impacting Races 2 and 3. He did the team proud. They worked so hard to fix the Race 1 damage and a great drive from the back of the grid in Race 2 was just reward. Tom had a solid first couple of races with an Independents’ win as well, which sees him at the sharp end of both championships.

“Tom is doing a great job, consistency wins the BTCC and he knows that. Its a great start to the season with six out of six points finishes.”