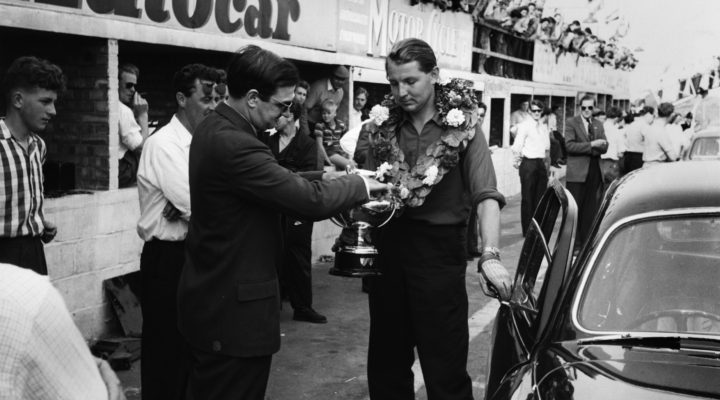 Sopwith was the son of Thomas Sopwith, a famous aviator, America’s Cup yachting competitor and creator of the famous Sopwith Camel, a First World War biplane.

Sopwith Jr began a racing career at Goodwood in the early 1950s in a Jaguar XK120, following in the wheeltracks of his father, who had been one of the early racers at Brooklands.

The younger Sopwith was also a pioneer in his own right, building his own sports-racer, the Sphinx, in 1954 which was a success.

He scored many wins against the might of the prevalent C-type Jaguars in his Allard J2R-based machine. Sopwith formed his own squad, Equipe Endeavour, to field the Sphinx. The team was named after his father’s America’s Cup challenger.

Sopwith progressed into a Cooper T39 fitted with a Coventry Climax engine and a Cooper T38-Jaguar. His passion developed along with his trophy cabinet, but a serious accident at Oulton Park in 1955 cut short his ambitions.

He returned in saloon car racing and was in the right place at the right time when the British Saloon Car Championship, now the BTCC, was announced in 1957. For the following season, Sopwith was on the grid with a Jaguar 3.4-litre saloon.

He finished the championship on equal points with Austin Westminster driver Jack Sears and the two conducted two five-lap shoot-outs at Brands Hatch at the end of the season, where Sears prevailed by 1.6 seconds.

Sopwith retired at the end of the season but Equipe Endeavour continued in the BSCC and in various sportscar championships until it closed its doors in 1962. It had been a major force in closed-roof racing.

Sopwith’s need for speed wasn’t sated, and he raced in off-shore powerboats and was also one of the prime movers behind the inaugural London-Sydney marathon in 1968.

A lifelong member of the BRDC, he became its director and chairman in 1993.

The BTCC extends its sincerest condolences to the family and friends of Tommy Sopwith.