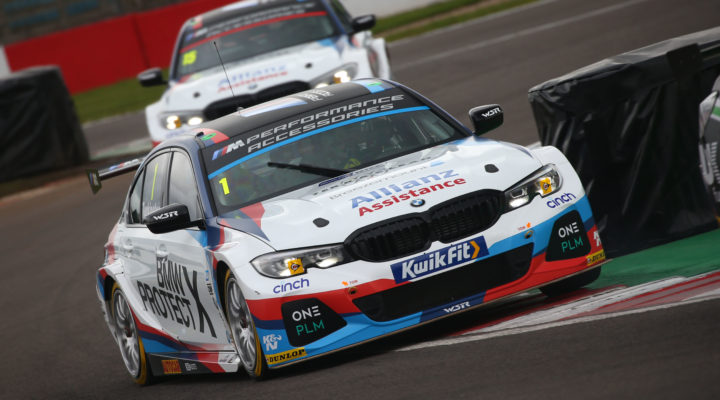 The BTCC speeds into Thruxton this weekend (18/19 May), with BMW trio Colin Turkington, Tom Oliphant and Andrew Jordan all hopeful of maintaining recent momentum around the fastest circuit in the country.

Turkington heads there sitting third in the title chase in Britain’s premier motorsport series. Behind the wheel of the new BMW 3 Series, the Northern Irishman raced to a commanding double victory last time out at Donington Park that vaulted him ten places up the championship table and to within just five points of the summit of the standings. The defending champion is four times a previous winner in Hampshire, and twice ascended the podium there this time last year.

“I’m really looking forward to Thruxton,” said Turkington. “It’s a track I enjoy, and it certainly rewards bravery. We think it should suit the characteristics of the 3 Series better than the 1 Series, particularly in terms of stability through the high-speed corners.

“The test there last month was very productive from my perspective, and it gave me the opportunity to tailor the new car a lot more to my liking. With so few opportunities to run at Thruxton, it was important to make the most of the time we had and I think we did just that.

“The aim is simply to keep on scoring good points and convert opportunities into results. I’ll carry 36kg of success ballast into the weekend, but we coped well with the weight in race two at Donington so I think we’re in good shape.

“It’s been a superb start to the season, which is no less than everybody at BMW and WSR deserves for their efforts. Hopefully we can keep the momentum of development going and continue that form this weekend.”

Team BMW stablemate Tom Oliphant achieved his own milestone at Donington, with an impressive drive to reach the rostrum for the first time in his fledgling BTCC career in the weekend’s opening race. The BMW new boy might not have much recent experience at Thruxton – until last year, he had not competed there since 2015 – but judging by his confident start to the season, that is unlikely to hold him back.

“I’m really excited for Thruxton, and it’s great to be going there off the back of my first podium finish with Team BMW,” added Oliphant. “It was extremely rewarding to tick that one off so early on in the season, and I already feel very much at home in the 3 Series and inside the team.

“I cannot stress enough what an amazing job the WSR guys have done to get this car to the level it is at, and it should work well at Thruxton. The 3 Series is naturally a very aerodynamic car, which will play to our strengths, so I think we can be quietly confident ahead of the race weekend.

“We covered all bases by trying out three radically different directions at the test last month and came away feeling pretty happy. It’s the high-speed nature of the circuit that makes it so unique. It’s like nowhere else in the country, and when you factor in the slower Chicane and Complex, it’s difficult to ever get the set-up completely spot-on – it’s always a compromise and always a challenge.”

Running under the BMW Pirtek Racing banner in a third BMW 330i M Sport, 2013 BTCC title-winner Andrew Jordan found himself completely out-of-luck on home soil at Donington. He was tagged into a spin on the opening lap of race one and then hit broadside by a rival, leaving the Midlander feeling battered and bruised – and the West Surrey Racing crew with a sizeable repair job to add to their workload.

Car and driver are both back and fighting fit this weekend – and having slipped down the classification due to his non-score, the 29-year-old is determined to bounce back in style at a track where he has won twice over the past five seasons and was for a long time the qualifying lap record-holder.

“I can still feel the effects of the accident at Donington, but I’m taking big steps forward each day and when the lights go out, the adrenaline takes over – that’s always the best medicine,” said Jordan. “I was keen to begin building some momentum after the win at Brands Hatch, and it was so frustrating to be abruptly stopped in our tracks through no fault of our own.

“The WSR guys have done a stellar job to put the car back together again, and drawing a complete blank there has given me even more motivation to take a big points haul at Thruxton. We’ve already proved that we’ve got some really good pace in the 3 Series, and I loved Thruxton from the very first time I drove there. It’s bumpy and abrasive with big kerbs, and there’s no time to relax – the car gets a hard time, as does the driver, but it’s immensely rewarding.

“To be 47 points off the championship lead doesn’t mean much at this stage of the season – it actually comes with a few benefits, because we’ll carry no weight into qualifying and race one. My plan is to take every race as it comes and just enjoy the weekend, because ultimately, I didn’t enjoy Donington very much!”

All three drivers participated in April’s pre-event TOCA test day at Thruxton, placing sixth (Turkington), 11th (Jordan) and 14th (Oliphant) on the timesheets amongst the 29 competitors. This weekend’s action will all be broadcast live and in high-definition on ITV4, beginning at 1115.