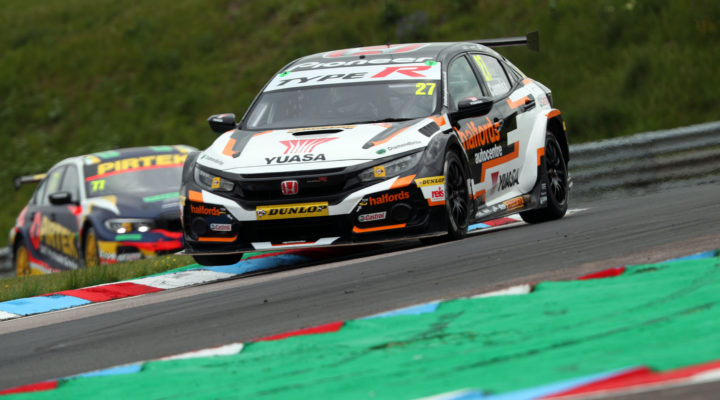 Halfords Yuasa Racing’s Dan Cammish fired out a pre-qualifying warning to his BTCC rivals by dipping under the existing lap record during Free Practice 2 at Thruxton.

Neal had to make do with tenth in this particular session, but considering that both Hondas pretty much sat out most of FP1 it would seem that the Team Dynamics-run squad is confident of its pace. Cammish will be further buoyed by the fact that he was also fastest during the test day at the Hampshire Circuit last month.

Rory Butcher was second fastest in practice today in the older-shaped Honda Civic Type R, whilst Andrew Jordan and Colin Turkington continued to show the prowess of the new BMW 3 Series by taking third and fourth on the timesheets.

Adam Morgan is somewhat of a Thruxton specialist, having taken three wins previously at the UK’s fastest track, and the Mercedes driver has been inside the top five for much of the day so far. Morgan had to recover from a minor off-track excursion after he followed Nic Hamilton’s Ford onto the grass, but the former will be hoping to again contend towards the sharp end during qualifying.

Matt Simpson (Simpson Racing) and Jake Hill (TradePriceCars.com) were next up in the order, whilst Tom Oliphant ensured that all three works’ BMWs were in the top eight.

BTCC legends Jason Plato and Neal completed the top ten positions, with the first 18 drivers covered by less than a second around the 2.36-mile track.

Qualifying for Round 7 of the 2019 Kwik Fit British Touring Car Championship takes place at 15:05 with the live streaming getting underway via www.itv.com/btcc at 15:00.