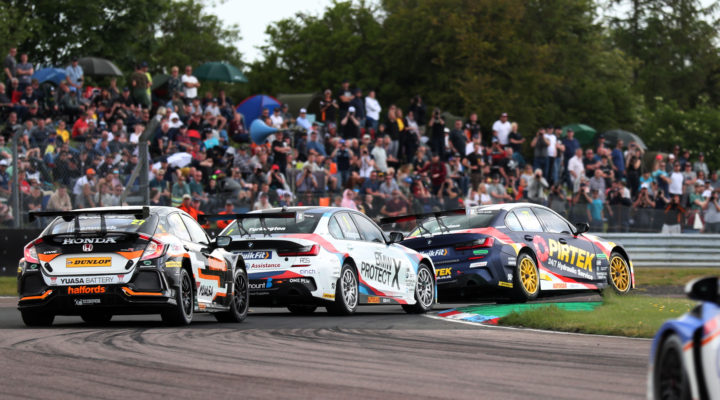 Andrew Jordan won his second race of the day at Thruxton after leading Round 8 of the Kwik Fit British Touring Car Championship from start to finish.

The BMW Pirtek Racing man made a steady getaway from pole position and never really looked back, despite being kept honest by BMW stable-mate Colin Turkington throughout the 16 laps.

“That was tricky with the weight on-board,” said Jordan. “It was good I had Colin (Turkington) behind, so I could really drive to a pace. Then it started drizzling and I was just saying ‘please hold off!’. I felt like the guinea pig and there were some big flies about and a bit of oil making it a bit difficult to see.
“I don’t think I’ve ever done a race one and two double. We’re on form. We’re a good team with a good car and good drivers. We came out of the blocks really well and the car felt similar here.”
Turkington sliced past the Hondas of Dan Cammish and Sam Tordoff on the opening lap and was untroubled from behind thereafter, although the final place on the podium was initially unclear.
“It’s much easier when you know who’s in front and what they’re doing and what they’re going to do,” said Turkington. “That was my 400th race as well so it’s nice to sound that out with a podium as well as the BMW one-two. We improved things for that race. It looks easy out front but it’s not. The pressure’s on. It’s been great work from everybody between here and Donington Park.”
Cammish would eventually reach the rostrum as Tordoff’s Cobra Sport AmD AutoAid/RCIB Insurance Honda struggled on near maximum weight.

“I’m just trying to be a little bit careful at the moment,” confirmed Cammish. “I got pinged for track limits which saw me on a final warning and I didn’t want to fall foul of it. You can’t beat physics! I’m trying my best, I really am. The BMWs are so strong off the line but I’m really happy with third. This weekend’s been such an improvement on the first two this season.”

BTCC legends Jason Plato and Matt Neal would also get the better of the fading Tordoff late on as the multiple champions enjoyed a rare tussle on-track.

The AmD-run Hondas of Tordoff and Rory Butcher were covered by just 0.369s at the chequered flag, whilst the Team Toyota GB with Ginsters Corolla of Tom Ingram came home eighth.