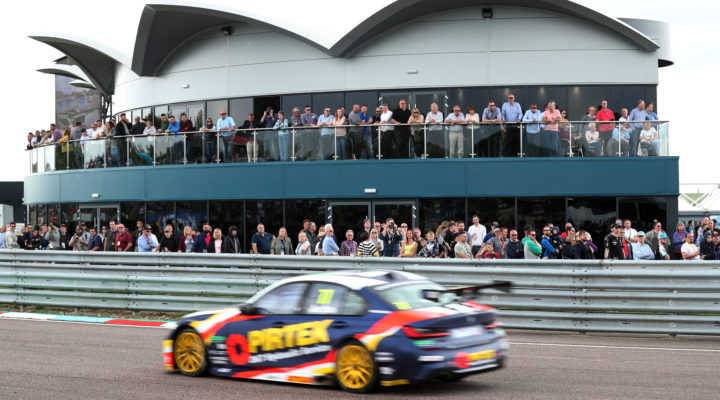 A huge crowd witnessed another top tier weekend of motorsport as Thruxton Circuit played host to Rounds 7, 8 and 9 of the Kwik Fit British Touring Car Championship.

Andrew Jordan was the star of the show at the famous Hampshire venue, taking victory in the first two races of the day behind the wheel of his BMW Pirtek Racing 330i M Sport.

BTC Racing’s Josh Cook also stood on the top step after a win in race three as fans who had travelled from all over the country were treated to some spectacular racing around Britain’s fastest track.

A full programme of support series’ action alongside qualifying ensured it was the best-attended Saturday in 20 years, while the banking was absolutely packed as race one got underway on Sunday afternoon.

In total, fans enjoyed 14 outstanding races, headlined by the brilliant BTCC but were also wowed by contests from Formula 4, Ginettas and Minis.

The late-spring weather held out and the hugely popular chicane grandstands and spectator banks around the circuit were filled, while the state-of-the-art Thruxton Centre – which opened only a year ago – was a hive of activity throughout the weekend.

Sam Tordoff of Cobra Sport AmD AutoAid/RCIB Insurance made a stellar start from pole once the highly-anticipated BTCC action got underway, having set a new lap record of 1m15.511s the previous afternoon.

The leading trio proceeded to pull away as battles raged behind, with BTCC veteran and fan-favourite Matt Neal muscling his way around the outside of Ash Sutton’s Adrian Flux Subaru Racing Levorg for seventh.

Tordoff looked set for a comfortable victory before a power steering issue caused a big wobble through the legendary Church corner on Lap 13, allowing Jordan to get a run on the 29-year-old, make a move around the outside at the chicane and cruise home for his second win of the season in front of the packed grandstands.

Race two began in familiar fashion, with the BMW pair of Jordan and Turkington both enjoying blistering starts as Cammish bogged down from third on the grid.

Tordoff went door-to-door with Turkington through Allard and past the imposing Thruxton Centre but wasn’t able to hold off the three-time champion into the Complex, meaning it was a BMW one-two at the end of lap one.

There was also plenty of action further back with contact between the Team Shredded Wheat Racing with Gallagher Ford of Ollie Jackson and the BTC Racing Honda Civic Type R of Chris Smiley, causing the former to retire and the latter to drop down the field.

Jordan and Turkington streaked away at the front to secure a comfortable one-two while Cammish rounded out the rostrum after working his way past Tordoff at the chicane on lap five, making contact with the AmD driver under braking and forcing both drivers to cut behind the tyre pillar on the apex of the corner.

Former McLaren F1 Team Principal Martin Whitmarsh conducted the reverse grid draw, pulling Sutton’s number out of the hat to sit on pole for the ever-popular final race of the day.

However, it was Cook that got the best launch and snatched the lead on the way into the Complex before the safety car was called into action following contact between Collard and the Mac Tools with Ciceley Motorsport Mercedes of Adam Morgan.

Jordan’s strong weekend ended sourly when the BMW Pirtek star was tipped around by Stephen Jelley on the restart, but things were calmer near the front as Cook showed great pace to hold a comfortable lead.

Butcher capped a strong weekend with an excellent pass on Sutton for second into the final chicane on lap five, keeping his cool through a second safety car period to bank a sizeable points haul and move level with Turkington at the top of the Championship.

Fans have another chance to witness top level touring car racing at Thruxton when the BTCC field makes a second visit to the circuit later in the season for Rounds 19, 20 and 21 on August 17/18.

In the meantime, supporters can get their fill of automotive action at the Thruxton Motorsport Celebration on 1/2 June where there will be a mouth-watering array of sensational sportscars, flame-spitting saloons and evocative single-seaters.

The annual event, founded following the success of our 50th anniversary celebration, will feature iconic on-track demonstrations in addition to stunning ‘Battle of Britain’ flypasts as the past comes back to life at the fastest circuit in the country.

Bill Coombs, Thruxton Circuit Director, said: “We were delighted to welcome such a fantastic crowd to witness a sensational weekend of racing. The thrills and spills of the BTCC were there for all to see, but the entire bill of racing provided such great entertainment. The Minis were a wonderful addition to the line-up and seeing so many of them slipstreaming and getting sideways was a real joy.

“The Saturday alone produced the best attendance figures we’ve seen in some two decades, which shows the great appeal of the BTCC and Thruxton as a venue. The Thruxton Centre, which has been open for business almost a year, was a hive of activity throughout with guests enjoying the facilities over the weekend. The best thing about it all… is that we have a chance to do it all again in August this year as the BTCC makes two visits to Hampshire in 2019. Attention now turns to the Thruxton Motorsport Celebration at the beginning of June, which I’m sure will be a wonderful event.”