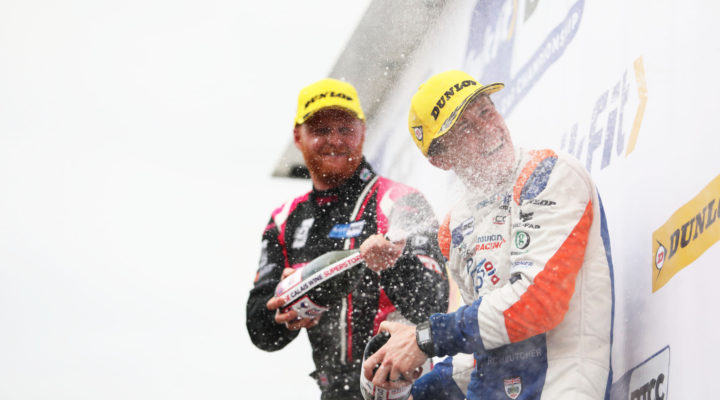 Cobra Sport AmD with AutoAid/RCIB Insurance Racing built on its strong start to the season with a maiden pole position and two podium finishes at Thruxton.

The West Thurrock-based team headed for the fastest circuit on the calendar in confident mood on the back of a solid test at the venue last month, with drivers Rory Butcher and Sam Tordoff both challenging at the sharp end of the field.

Having qualified on pole with a record-breaking lap, Leeds racer Tordoff made the ideal start to race one to lead the way into Allard for the first time and controlled the race from the front through the early stages.

Maintaining a lead of just over half a second over the chasing pack, Tordoff suffered a battery problem that affected the power steering on his car, slowing him through the high-speed Church corner on lap 13 and giving Andrew Jordan an opening to get ahead on the run up Woodham Hill.

Fighting around the problem, Tordoff was able to fend off the current-generation, factory Honda Civic Type R (FK8) of Dan Cammish through the closing laps to secure second spot and his first podium finish of the year.

Tordoff lost a place to a quick-starting Colin Turkington in race two but held third in the opening laps before a coming-together with Cammish at the chicane saw him slip out of the podium places.

Contending with a large helping of success ballast on-board he eventually took the flag in sixth.

Heading into the final race of the weekend, Tordoff looked well set to fight for another podium finish as he ran fourth in the early stages but a further, unrelated, issue with the power steering instead forced him into the pits to retire.

“It was a bit of a frustrating weekend for me but at least I’ve been able to put some points on the board after the troubles we faced in the opening rounds,” said Tordoff. “To qualify on pole in the way that we did was amazing and I was controlling the opening race before we had the issue with the battery.

“That robbed us of a certain victory and had the race been a few laps longer, I doubt we’d have finished – so to salvage second was still a good start to race day. With the weight onboard in race two, we picked up more solid points and I was happy with how things were going at that stage.

“With the pace in the car, I think we could have pushed for another podium in race three and the fact we were unable to finish that one has spoiled the weekend a bit. Whilst I’m pleased to have got two solid finishes, I’m disappointed with how things ended.”

Fife racer Butcher qualified fifth on the grid despite carrying additional weight on his car, and came through the opening race unscathed to add solid points to his tally – holding station from start to finish.

Butcher was in stealth mode again for race two, quietly posting the fastest lap of the race before taking the flag in seventh.

With the team having resolved a damper issue on his car, he lined up fifth on the grid for race three, and a strong start saw to jump up into third place on the opening lap.

Battling ahead of Ash Sutton at Goodwood after an early safety car period, Rory ran in second place all the way to the finish and heads away from Thruxton in a share of the overall points lead, whilst also heading the way in both the Independents’ and Jack Sears Trophy standings.

“It was a fantastic weekend after a tough Saturday where we lost a lap for track limits that would have given us pole,” said Butcher. “We didn’t quite have the pace to run at the front in race one or two but then found an issue with a damper ahead of race three. With that sorted, the car really came alive and it gave me the confidence I needed in the high-speed stuff.

“I was able to get ahead of Ash (Sutton) with a solid move out of Goodwood and hoped to push Josh (Cook) but he kept it nice and tidy and didn’t put a foot wrong. When Ash got a second wind, I focused on bringing the car home and we have ended up with some cracking points and a share of the points lead.

“It isn’t where I expected to be at this stage although I did think we could compete. I’ve kept the same mentality I had in the MG of racing hard, keeping it clean and bringing it home. When I have a fast car like we did in race three, we’ve got to push for those big points and some silverware.”

Cobra Sport AmD with AutoAid/RCIB Insurance Racing sits third in the Teams’ Championship and second in the Independents Team Championship.

“To come away from Thruxton with pole and two podium finishes is great for us as a team and it’s just a shame that a mechanical issue robbed us of what would have been a first win on the road.

“Both Rory and Sam have driven well this weekend, and we have once again shown that we are capable of taking the fight to the big boys at the front of the grid.

“With three rounds done, we’re in a great position in the championship standings but it’s important that we continue to work hard on our weak areas as a team because – despite enjoying another fantastic weekend – we can always improve.

“We need to keep our collective heads down and remember that it is a long season, and there are plenty more twists and turns still to come.”